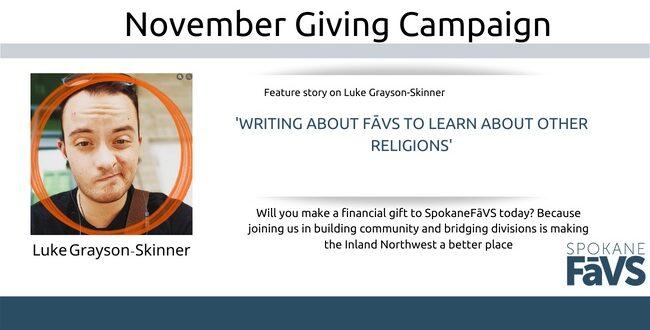 Before Luke Grayson-Skinner wrote for SpokaneFāVS, he left his church and came out as transgender.

Grayson-Skinner grew up in a conservative Evangelical mega-church that preached anti-gay sentiments.

“When I left the church and came out as trans, I lost everyone who was ever a significant adult in my life, and most of my friends and other kids that I grew up with because we were all taught that being gay was an unpardonable sin,” he said.

Grayson-Skinner said he was told that walking away from the church was just as bad as being gay and that having issues with mental health meant you were not praying hard enough.

He said when he moved out of his home on his own and started learning about different religions.

“So having the ability to see and learn from people of all different backgrounds, people who are accepting, was mindblowing and something I had never experienced before, and I saw how much of a community was being made based on mutual respect and how many voices were able to be heard because of it, including mine,” he said.

Since then, Grayson-Skinner has written about transgender rights and issues, mental health and homelessness amongst other topics. In the future, he would like to write about how the city of Spokane has addressed homelessness.