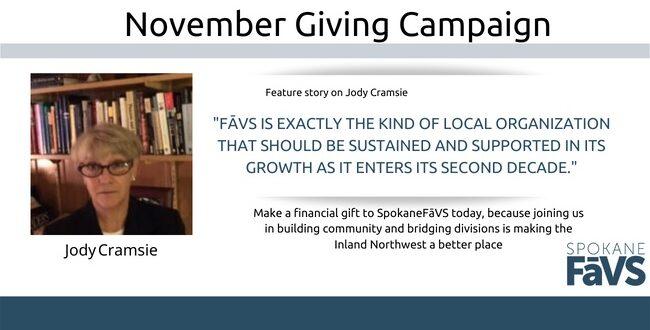 Jody Cramsie has always sought out how to contribute to society in interesting, challenging, stimulating and meaningful ways. She did it through work in the legal, development and nonprofit worlds.

Now she does it as a columnist and board member for SpokaneFāVS.

She was drawn to writing as a young age and credits both her teachers and family.

“Expressing ideas and being articulate about it was important in my family and was surely fostered with dinner table discussions and debate, where the thoughts of the young people were valued and taken seriously by the adults,” Cramsie said.

She was raised in a conservative Lutheran home, but said the tradition became an obstacle for her as she began to think for herself, eventually abandoning religion altogether.

“It seemed intellectually dishonest and socially irrelevant,” Cramsie said.  However, in college she was required to take a theology class and said Sr. Vera Chester changed her mind.

“(She) was the incredible professor who opened my mind to the real, i.e., historical, world of the Old Testament.  As a history major, that was the entrée I needed to see religion as more than an insular and self-referencing institution,” Cramsie said. “From that point on, I took every theology class in college that was possible.”

Her interested in theology hasn’t changed since then, which is why FāVS is appealing to her.

“I saw FāVS as a place where people with different viewpoints and life experiences could express their ideas with respect and intellectual curiosity. I thought I might be able to contribute to those conversations,” she said.

Cramsie has written for FāVS since October of 2020. She said COVID and the 2020 election were motivation to get involved.

She is a sustaining member of FāVS and recently joined the Board of Trustees.

“FāVS is exactly the kind of local organization that should be sustained and supported in its growth as it enters its second decade. We need that. This area needs that.  Particularly in these times, the intersection of religion and politics and wider social concerns has immense significance, “ she said, adding that she hopes other readers will join her in supporting the organization. “The service FāVS provides to its readers and the local community is valuable. Whatever dollar amount is given through this campaign, the donor will more than get their money’s worth.”

Previous ‘Celebrities for Jesus’ author and journalist Katelyn Beaty comes to Whitworth on Nov. 10
Next Should Christians Listen to Secular Music?