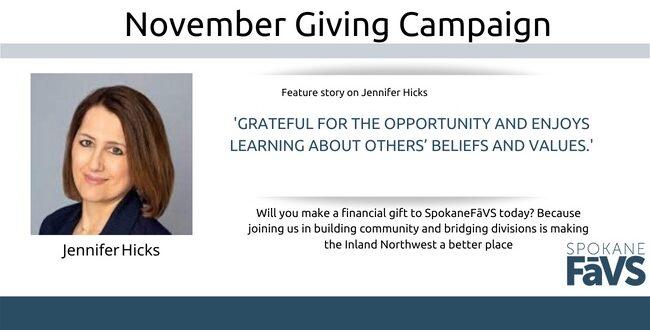 Jennifer Hicks is a new columnist for SpokaneFāVS who is a member of The Church of Jesus Christ of Latter-day Saints.

She first got involved with FāVS after she reached out with a question and later met founder and executive director Tracy Simmons over Zoom.

She was then invited by Simmons to be a columnist for the nonprofit.

When she first started writing columns, Hicks said it was a little intimidating because she herself is not a professional journalist. However, she liked the idea of being able to share the perspective of her church.

Hicks said she is grateful for the opportunity and enjoys learning about others’ beliefs and values.

“I am ready and willing to answer questions people might have about my faith. I have had this role with SpokaneFāVs for just a few months,” Hicks said. “My hope is to provide helpful information to people who have a genuine curiosity about The Church of Jesus Christ of Latter-day Saints.”

Hicks hopes she will continue to learn and grow as she writes more.

Previous Greetings from a Cesspool of Liberalism
Next ‘Black Panther: Wakanda Forever’ Argues You Need Religion For Grief