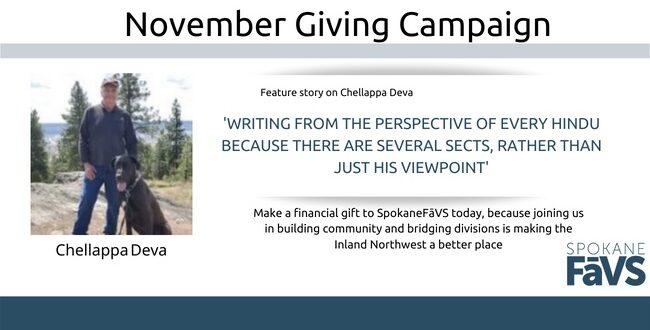 When Chellappa Deva met Sat Guru Sivaya Subramuniyaswami in 1968, he was inspired by the gurudeva’s teachings and has followed him ever since. Now, Deva is a devout Hindu and writes about his faith through SpokaneFāVS.

Deva converted to Hinduism because he believes Sanatana Dharma Hinduism has the answers to what life is about.

“Through selfless service, devotion, temple worship, bhakti, yoga, leading to enlightenment self realization and  freedom from rebirth leading to total oneness with God,” he said.

While Deva is not a priest, he does Ganesha and Shiva puja at the Spokane Hindu Temple & Cultural Center once a week until they get a real priest.

“It’s a simplified version, in the sense of the temple puja. People like it and it works,” he said. “My goal is to help the temple come up and hopefully before too long we can get a real priest and have a real temple here in Spokane.”

Deva is dedicated to Hinduism and went to India twice for pilgrimages.

“The first time I went on a pilgrimage with my guru who was Sat Guru Sivaya Subramuniyaswami, and about 50 people from different countries around the world. We went to a lot of the big temples in South India,” he said.

Deva said the temples are hundreds of years old and he felt uplifted going to them.

“I enjoyed India. My wife had some relatives there that we stayed with. I could be very happy living there,” he said.

For SpokaneFāVS, Deva likes to write about the Hindu perspective on subjects such as freewill and abortion. He tries to write from the perspective of every Hindu because there are several sects, rather than just his viewpoint.

Deva’s most recent column for SpokaneFāVS details the Hindu Scriptures of Vedas and Agamas.

“I hope the articles are helpful and informative,” he said.

Previous Abortion was no dud for Democrats
Next Despite Mastriano’s loss, don’t count out Christian nationalism