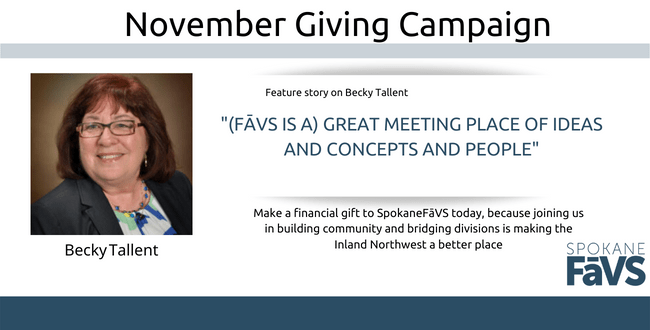 Rebecca “Becky” Tallent is many things. She’s a journalist, a retired University of Idaho professor, a Native American of Cherokee descent, a 1912 Center board member and a human rights columnist for SpokaneFāVS.

Tallent began writing for FāVS in March and has since produced a column or two every month on various civil rights topics, from her mother’s dementia to the “outrageous” political stunts state governors are pulling on immigrants.

Her latest piece is in honor of Native American Heritage Month, in which she writes about the stereotypical notions still surrounding Native Americans today.

“I think human rights is a very major part of how we believe what we believe,” Tallent said.

Although she’s not certain if journalism as a career found her or if she found journalism, Tallent’s earliest memory in the field is starting an underground newspaper when she was in junior high.

“I was a little bit of a rebellious teenager,” she said. “I felt like our voices weren’t being heard. And, so, essentially I started an underground newspaper.”

She says, yes, she got in trouble for it, but people did start listening. Because of her paper, the school changed the skirt length dress code rules from touching the floor when on their knees, to 2 inches above the knee because her argument was they were being fashionable, “not obscene.”

“It gave me a sense of power that [writing] had and that people could listen to you … and you could tell the truth about things,” Tallent said.

From there, she never looked back and teaching also became a part of her mission.

Her mother’s “clan of the Cherokee were teachers and preachers,” Tallent said. “And I always wanted to teach. It was just something that was built into me.”

Retiring three years ago, Tallent now has the time to become a columnist. She says SpokaneFāVS is an important outlet for this season of her writing because, as a journalistic publication and a community, it allows different people to come together.

“It’s just a great meeting place of ideas and concepts and people,” Tallent said. All of which she says is done in a “safe environment.”

“That’s why I think SpokaneFāVS is so important.”

Previous Sacred Texts: The Eastern Orthodox Church on Scripture
Next Why Go to Church?