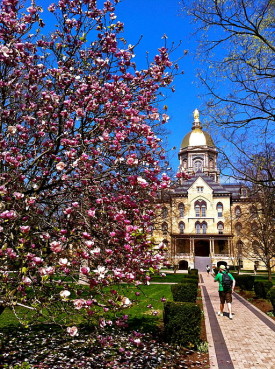 Spring flowers in front of the Golden Dome at the University of Notre. Photo courtesy of Know1one1, via Wikimedia Commons

Spring flowers in front of the Golden Dome at the University of Notre. Photo courtesy of Know1one1, via Wikimedia Commons

(RNS) The Catholic Church in the U.S. has taken a lot of heat over its stance against gay rights and for policies that often bar openly gay people from participating in church life.

But the University of Notre Dame, an icon of American Catholicism, increasingly has been going against that current when it comes to gay athletes. On Thursday (May 8), the school launched a new campaign to reinforce a message of inclusion wrapped in the wider message of the Catholic faith.

“Because the university values LGBTQ students in the Notre Dame community, as indeed it values all of its students, the university is committed to fostering an environment of welcome and mutual respect that is grounded in its Catholic mission,” Notre Dame athletic director Jack Swarbrick, says in a voice-over for the two-minute video that kicks off the campaign.

The video features athletes from every men’s and women’s team on campus, including tennis player Matt Dooley and rower Olivia Kacsits, both seniors who have publicly identified as gay and both of whom pushed for the video and campaign.

“Our goal was to increase visibility of the supportive atmosphere created by the Notre Dame student community. Unfortunately, many Notre Dame observers have a different perception of the on-campus atmosphere,” Kacsits said in a statement on Thursday. “Something I believe to be central to Notre Dame’s philosophy is that we believe in fostering and practicing unconditional, Christ-like love.”

Given the university’s high profile in both the U.S. church and Catholic education, any move by Notre Dame is likely to have ramifications well beyond its picturesque campus in South Bend, Ind. When Notre Dame awarded President Obama an honorary degree in 2009, nearly every U.S. bishop was forced to weigh in — many of them in disapproval.

Notre Dame recognized an official gay-straight alliance, PrismND, in 2013, after refusing to approve one for many years. Several other Catholic schools are increasingly following suit.

Dooley came out in a March essay in Outsports magazine in which he recounted growing up gay in a conservative environment in Texas and then arriving at a campus where the “religious affiliations and its resulting culture can be easily described as a pressure cooker for someone struggling with his sexual orientation.”

Dooley continued to contend with the “mental burdens” of being closeted and in September 2011 attempted suicide. He recounted his journey to recovery and to finally coming out to his teammates last September, and the support he has received since.

That includes the latest project, done in conjunction with the You Can Play organization, which is dedicated to promoting respect for athletes “without regard to sexual orientation or gender identity.”

You Can Play was co-founded by Patrick Burke, a 2006 Notre Dame graduate, who also worked with Jason Collins, the NBA star who came out as gay last year, and Michael Sam, the All-American University of Missouri football standout who announced he was gay earlier this year.

“The church is supposed to be a place where people come together, where people are united in an idea of love and caring for each other,” Burke said. “When you start being exclusionary, that is not what Jesus taught.”

“From day one, nothing we have ever done has ever contradicted Catholic teaching,” he said, noting that the group even received an OK from a canon lawyer. “We are tremendously excited that Notre Dame recognizes that as well.”

When Sam came out at Missouri, Notre Dame football coach Brian Kelly told the Chicago Tribune that he thought gay players should be welcomed and that Notre Dame “is about embracing diversity” even though “that doesn’t necessarily mean we agree with homosexuality.”

Dooley and Kacsits are not the first athletes at a Catholic school to come out, nor the first to be welcomed for doing so.

Last May, Jallen Messersmith, a basketball player at Benedictine College in Atchison, Kan., publicly identified as gay and told of how the school had supported him since he told officials and teammates there in 2012.

“We are a Catholic college, and we take our mission and values seriously,” Benedictine President Steve Minnis said. “Our duty as Catholics, straight from the church, is to treat everybody with respect and accept them for who they are.”

Many dioceses and Catholic schools have come under fire in the past year for firing gays and lesbians who publicly identified as gay or who married their partner under same-sex marriage laws that are being adopted in a growing number of states.

Previous Carrying a cross at Bloomsday
Next Forgiveness, a poem