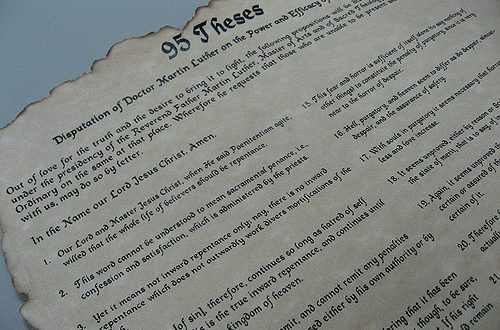 Disputation of Dr. Martin Luther on the Power and Efficacy of Indulgences. Wikipedia photo by Karen Tan

Not for Sale: Reformation 2017

There’s an episode of the TV show Cheers that’s kind of well known among some Lutherans. Woody gets married and then discovers that Kelly, his bride, is “a different religion.” Frasier says, “But Woody, I thought you were both Lutheran.” “Well,” Woody explains, “She’s Lutheran Church in America and I’m Missouri Synod.” In the course of the show, there are references to the Book of Concord (a collection of Reformation documents and other defining articles of faith) and accusations of heresy. When it all works out in the end, as sitcoms always do, Kelly finally says to Woody, “Now, when we go to heaven, we won’t have to be separated by barbed wire and barking dogs.”

You would think that’s an exaggeration for the purposes of TV. However, my own parents were relieved to find out that they were both raised in the same strand of Lutheranism that had migrated to America. When my Minnesota-farm-girl mother met my Montana-mountain-man father on a blind date in Iowa, she asked him, “What kind of Lutheran are you?” Dad replied, “Kind?”

This week, we observe the 500th anniversary of the Reformation. Many of us spent Sunday gathering to sing “A Mighty Fortress” and other hymns written by Martin Luther. We wore red. We heard Romans chapter 3 in which Paul speaks about the gift of grace apart from works prescribed by the law. We gave thanks for traditions that can change, and for the continual provision of the Holy Spirit that keeps renewing the church.

My own call and my ability to follow it is a result of church systems being changed by the movement of the spirit. I am a female pastor. And though women’s ordination is certainly an expression of the freedom and spirit-filled change that Reformation Day celebrates, Luther himself would have reserved some of his choicest insults for me if I ascended into a pulpit in his time.

What are we celebrating this week? Members of my very Lutheran family have spoken awful, awful things to me about Catholics as if it were widely held truth. It’s still pretty popular among Lutheran clergy to make fun of our Evangelical brothers and sisters in faith. Too often, pride in the good bits of heritage turns a corner and becomes celebration in how we aren’t like our (less worthy) neighbors. I won’t wear red for that.

In fact, I don’t even sing “A Mighty Fortress.” I know, gasp! I’m fairly sure the world is not in dire need of a fortress image of God. We’re great at fortresses. Walls, physical and otherwise. We’re awesome at thinking we are under attack and using that thinking to justify fear and violence. Yes, Luther had to hide for his life in a castle. And he wrote stunning theology that calls us out of such hiding.

So, again, what are we celebrating? What does the proclamation of grace from 1517 have to offer our struggles in 2017?

This question was taken up by a meeting of the Lutheran World Federation in May of this year. That meeting happened in Windhoek, Namibia in sub-Sarahan Africa. Lutherans from all over the world gathered together to think about the next 500 years of our faith. Inspired by the events of 1517, they chose three themes to focus our ministry as global Lutherans. Notice a common phrase…

That’s right: not for sale. Recall that the original complaint of Luther was that human souls had been given a price tag with the sale of indulgences. The Roman Catholic Church soon banned the practice. But today, we continue to place a price tag on each other, on the earth, and on life itself. Even our national and civic identity is available for sale to the highest bidder.

Anytime Luther felt himself tempted or tormented, he would shout out, “I am baptized!” It was a strong refutation of all that would separate him from the free and empowering love of God. What if we who celebrate this Reformation Day picked up that practice, using it anytime someone wishes to buy or sell our selfhood?

I am claimed by waters of truth and grace!

“I am broken, and beloved!”

For that, I would wear red all the time. Semper Reformanda.