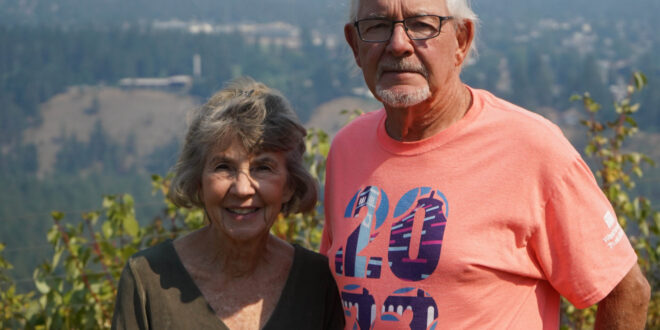 Spokane residents Robert and Anita Dygert-Gearheart have compiled information on climate and human-caused climate change into a curriculum “Wake Up World” they hope people in faith-based and non-faith-based groups will utilized to become more informed on climate challenges facing the planet. / Photo by John McCallum (SpokaneFāVS)

Sometimes, fear is good — especially when it propels people toward positive actions.

Fear was what Robert and Anita Dygert-Gearheart felt as they learned more about the effects of climate change, starting with listening to a podcast about human-enhanced change and the destruction it was bringing while driving across the Arizona desert in 2020. The more the life-long United Methodist Church (UMC) couple heard — and digested further on the subject — the more afraid they became.

But instead of cowering behind a “what can we do, there’s no hope for the planet” attitude, they decided to do something about a crisis decades in the making. The result was “Wake Up World,” a climate science education curriculum that according to its introduction “can be distributed to local faith communities and taught by volunteers with no particular expertise in climate science.”

“We sense a moral, economic and national security imperative for all of us to become educated on this important topic,” the Dygert-Gearhearts — who relocated to Spokane from Ashland, Ore., several years go to be closer to family — wrote in the curriculum’s introduction.

The seven-class curriculum, started in 2021, is a collaboration spearheaded by the Dygert-Gearhearts that involved friends and family from coast to coast. That began with a book study club — with one of the first reads being “Overshoot, the Ecological Basis of Evolutionary Change.”

Published in 1980 by late Washington State University environmental sociology and human ecology professor William Catton, the book provided a basis for understanding the connection between “human experience and the earth’s ecosystem.” That was followed by more books along with podcasts, YouTube videos produced by scientists and organizations involved in the issue together with research into existing curriculum to help in understanding the science and the climate crisis.

Robert Dygert-Gearheart said what they found with respect to the latter was, while there are curriculum on climate change geared to children, there was very little for adults. And while a number of religious denominations, including the UMC, have issued statements about human-caused climate change and its negative impacts on society — especially regarding social justice issues — the couple didn’t find any teaching tools that could be used to help acclimate congregants to the issues, something they realized was important if possible actions addressing human-enhanced climate change were to take place.

“We thought, well, maybe that’s what we need to do because we believe grassroots (efforts) are where to start,” he said.

The curriculum is designed to provide currently researched and available information that “99% of scientists agree on” for individuals interested in presenting the crisis to others in a way that doesn’t require them to become a climate scientist. It’s also designed for those participating in the classes who are concerned about the climate crisis, and are exposed to discussions on the subject in the media, as a means to find “a place to be responsibly introduced to the topic.”

The original six classes cover topics ranging from how the climate crisis came about and its current condition to impacts on our daily lives and our environment. The sixth class “What Can I Do?” originally provided participants on steps they can take to help combat climate change, but included so much information that it was felt a seventh class “Let’s Get Started” was needed.

Each class mixes short written summaries of current climate research and terminology with website links and YouTube videos that provide expanded information, and in some situations first-hand accounts and examples of the impacts of climate change. The information is the latest available data at the time of publication, and the Dygert-Gearhearts encourage those undertaking the curriculum to do their own research and add any new information.

Two-hour blocks are recommended for each class presentation, but this can be modified to fit the group doing the learning. Some groups already using the curriculum scheduled classes in one-hour segments over a period of several months while others have participants doing the reading and research work at home and reserving meeting time for discussion.

There is also an individualized study for those wishing to learn at their own pace.

While the curriculum was produced with faith communities in mind, the Dygert-Gearhearts point out in the introduction that it is not Bible study. Feedback they received included making the curriculum more applicable for use by many faiths as well as non-faith-based groups, and biblical references only take place in the first class “Faith, Justice & the Climate Crisis.”

Anita Dygert-Gearheart said some individuals in Ashland, Ore., are using the curriculum to set up a discussion group on climate change in their neighborhood. She added that of the participants taking part in a class they facilitated this summer at their home, only one couple went to church on a consistent basis, with Robert adding the ages of those taking place ranged from 19 to 88.

“If creation is a gift from God, shouldn’t we then be more thoughtful, respectful and considerate about how we treat that gift?” she said. “The faith is the underpinning for why we’re interested.”

It’s a position shared by some scientists. In a video for the curriculum’s first class, climate scientist Katharine Hayhoe states that “[f]aith and science are not in competition.”

“Climate change isn’t just a scientific issue,” Hayhoe says. “It is also a question of right and wrong, and for 80% of us around the world, we often get our sense of what is right and wrong from our faith.

“Informed by our science, it’s our hearts that tell us we must act,” Hayhoe adds.

Religions such as Islam and Buddhism have issued statements about climate change and the need to address the societal impacts caused by human actions on the environment. In June 2015, Pope Francis issued an encyclical stating that climate change was not just a scientific issue.

Protestant denominations ranging from the UMC to the Presbyterian Church (USA) have not only published statements defining their positions on climate change but have initiated programs for their congregants to take their own actions to deal with the crisis. And this past August, the National Association of Evangelicals (NEA) released a 50-page report calling climate action a “Christian responsibility,” a major call to action from a religious demographic that, according to an article in The Hill, is “far less likely than the general population to consider climate change a threat.”

But even with more religious denominations acknowledging human-caused climate change and its impacts to vulnerable populations, the subject is something many people simply don’t discuss much.

According to a 2021 survey by Yale University’s Program on Climate Change Communication, while 77% of respondents in the United States believe global warming is happening and 64% believe it is affecting the weather, just 57% believe it’s caused by human activity. More telling is that just 35% of respondents said they discuss global warming at least once a week, with just 33% saying they hear about the issue at least once a week in the media.

There are many reasons for the beliefs and perceptions about climate change reflected in the Yale study, some of which stem from lack of understanding about the issues involved. Robert and Anita Dygert-Gearheart hope those utilizing “Wake Up World” will achieve outcomes including “basic understanding of what the majority of climate scientists today agree is happening to our ecosystems” along with the capability to “better understand and critically evaluate what they see and hear regarding the climate crisis.”

They also hope the curriculum will lead to people taking action to begin to help combat the crisis. Whether they join a climate change group or take small steps on their own such as driving less and being more cognizant of what they throw away, undertaking measures to mitigate the effects of human-caused climate change need not be something only requiring actions on a global scale.

“If you put a lot of one persons together, it can make a difference,” Anita said.