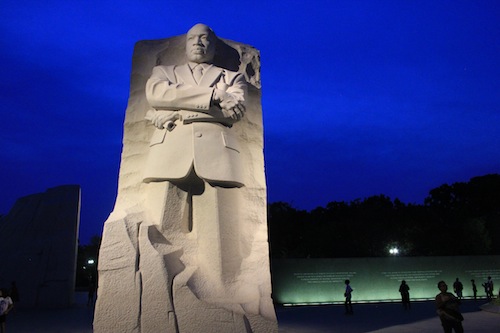 Not a Strategy — A Way of Life

One of the differences between the Church and the State is that the state tends to honor its greatest citizens on the day they were born, while the Church honors its greatest people on the day they died.  Jesus, of course gets it both ways, which seems only right.  Because I consider Martin Luther King Jr. to be one of the great people of Christian history, my tendency is to want to honor him on April 4, rather than Jan. 16, but in accordance with the adage “when in Rome, do as the Romans,” I will reflect on his legacy just now.
We have long since learned that King was a fallible human being and I have no wish to make him more than that.  But it is important to notice that his vision was much larger than many people imagine.  He is identified as the great crusader for equal rights for black people in 20th century America; certainly he was that, but he was much more than that.
His commitment to non-violence was not simply tactical, though he once called it that.  More deeply, it was theological. He believed in the equality and humanity of all people before God, and therefore he understood, as some others in the equal rights movement did not, that violence against a racist white person was just as much violence against a child of God as was violence against a black person.  King carried this conviction to its remarkable extreme.
At one point, in a statement seared into my memory, even though I have lost the speech in which he said it, King declared that the white people of the Jim Crow south–in this case I believe it was specifically Bull Connor–could do whatever they wanted, beatings, dogs, firehoses, and so forth, but no matter what they did, King declared, “We will not stop loving you.” That is not a strategy, that is a perspective, that is a way of life, that is the very voice of Jesus.
I do not know of another civil rights leader who said that, much less believed it, and it is that very perspective that led me then, and continues to convince me today, that King was the true representative of the Spirit of the Risen Christ in the movement for human rights for all, as that moment was manifested in the 50s and 60s.
It was also the perspective that made him widely misunderstood both by the advocates of segregation as well as by the advocates of civil rights, especially those who believed in achieving the goal through “any means necessary.”
In a world that, then as now, routinely dehumanizes enemies, and so justifies all sorts of oppression and even violence, King stands to this very day, as one great exemplar of a different way. King dehumanized no one; truly he recognized “the dignity of every human being,” and he proved that a movement that sought reconciliation and not revenge, equal rights not preferential treatment, could make progress.
Clearly we have not reached the end of the road King walked; equality for all in this country remains a vision, or to use his term, a “dream,” that has yet to be fulfilled.  We will never fulfill that dream until we have first been converted, as King was converted, to a life in which we truly do “love our neighbor as ourselves,” and realize in the bargain that our neighbor is everyone, not just those we like. The Spirit of Christ, which is the Spirit of God, led King on his way and, as sometimes happens, it led him to an early death.
May that same spirit lead us on our way, so that in the fullness of time it is not just “we” who shall overcome, but God.

Previous The Jesus Prayer in practice
Next Protestors, police clash in Washington as Trump assumes presidency