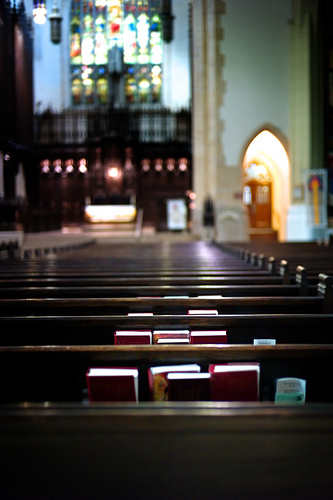 Nones on the run

A recent Gallup poll showed that there seems to be movement in religious America, which has seen the sharp rise of the “spiritual but not religious.”  This group of people is categorized as believers without a formal religious affiliation. This statistic is one of many interconnected shifts in our time. It is hardly speculation to see that with the rise of the nones (no religious affiliation, or “none”) there is also a decline in church attendance and ever-increasing distrust of religious leaders, who seem to be less trustworthy if not grossly hypocritical.

These two shifting demographics have been met with mutual distrust in recent years. While working as an intern at the Pluralism Project at Harvard University, I remember hearing conversations about “the nones” and what role they would play (if any) in the interfaith movement. This discussion led to a lot of frustration for those of us looking to study the demographic and pluralistic interactions across the American interreligious landscape. We are on the edge of a religious renaissance. Never before has a country been so religiously diverse. The cross pollination of truths has touched everyone in the U.S. and while the very way we understand what the definition of “religious” is called into question, we see it beginning to change before our eyes.

While I can honestly say that I do think that they play a role in the religious community. I also think that the nones and the church must reconcile and understand one another if they are to both remain relevant in our culture.

From my experience, the nones I’ve met have been incredibly spiritual people, sometimes more Christian than those who spend their Sunday mornings in pews.

What makes them more in-tune with the divine is their resolve to question authority. Many of them are disillusioned by the idea that the church is the last word on all moral matters. These are people who have dared to peer on the other side of church dogma and have yet to see any raining fire and brimstone. It is indeed spirit-killing to search for something the transcendent only to be met with “No!” Yet, because of this intrepid quest, there is a lack of spiritual community. Many nones are alone in their own beliefs and often have no support or peers to keep them growing and real, which runs the risk of falling into an inauthentic, jaded spiritual life.

For much of history, however, churches have taught parables and the good news in a very hands-off way. The point of going to church was much more like a troubleshooting conference rather than a political rally. Parishioners would hear a story, learn how this translated to them, and then be asked to practice compassion and love in their day-to-day encounters as they understood the modeling of the parables themselves.

Today our culture almost doesn’t allow us to reflect on spiritual truths. When the Googles and Wikipedias of the world can offer up instant, self-gratifying, easy answers to any of our questions imaginable, why would anyone take the time to think for himself? Introspection is difficult and takes time. It requires unplugging and, at times, spending an afternoon on the weekend in a church listening to vague parables that upon first glance may not apply to us. In these instances it even challenges one to be better than one is. This is a very important point, seeing as how the nones tend to be younger than those who claim to be churchgoers . Whatever commandments or allegiances solicited from the pulpit should be made to the heart, not to the pocketbook — or ballot vote — contrary to what may be the norm today.

What is interesting about this migration from church (and into one’s self) is that it is seen to be the church’s fault and thus the church’s problem to bring the people back into the fold. But this hasn’t been working too well in the past few years. The American population self-identifies as predominantly Christian but Americans are slowly becoming less a population of churchgoers. Eighty six percent of American adults identified as Christians in 1990 and 76 percent in 2008.The historic mainline churches and denominations have experienced the steepest declines while the non-denominational Christian identity has been trending upward particularly since 2001 . The challenge to Christianity in the U.S. does not come from other religions but rather from a rejection of all forms of organized religion. While marketing campaigns and slick new advertising has attracted many back to “church.” There still is a distrust of these old institutions, much like anything trying to rebrand itself (See: BP after the oil spill).

What results are two inconsolable groups with very radical ideas about the other.

How do we bring these two back to the table? Accountability is the answer.

For starters, the churches could be conscious of the times we live in and remember that the lessons taught from their chapels carry a lot more weight than they may realize. It would be wonderful to see a day when not one church spoke against any group of people but against poverty and injustice instead.

Nones would do well not to write-off the church as just another group of hate mongers, or people who won’t understand or accept them. While the Buddha attained enlightenment on his own, he went back to the marketplace and lived in communion with others — even those who did not accept or understand him.

All too often we find ourselves being divided into polarizing camps. This false juxtaposition between the churchgoers and the nones, if left unchecked, will not only damage the spiritual community, it will limit our very ways of understanding what it means to become fully human. The bottom line is that the nones and churchgoers need one another, and for them to reconcile and work in tandem start on solving more pressing problems in our culture would be the best.

Join us at 10 a.m., April 6 at Revel 77 Coffee for our next Coffee Talk where we'll furthe discuss the concept of spiritual community.