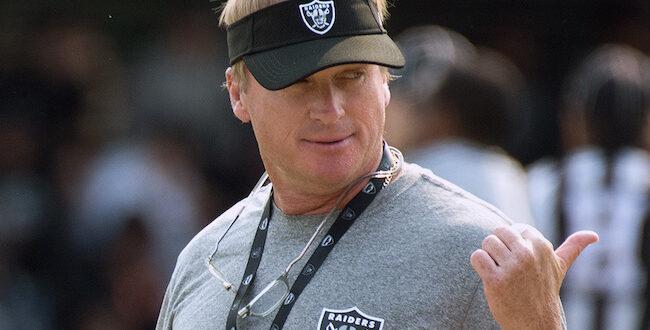 Oakland Raiders head coach Jon Gruden observes players during practice at their training facility in Napa Valley, Calif., August 7, 2018. The Raiders invited Travis Air Force Base Airmen to attend camp and were treated to a scrimmage between the Raiders and Detroit Lions and a meet and greet autograph session with players and coaches from both teams. (U.S. Air Force photo by Louis Briscese)

Is there a statute of limitations on stupidity?

How about racism? Misogyny? Homophobia?

Those questions and others arise following the Jon Gruden scandal that unfolded last week.

For non-football fans, Gruden was the coach of the National Football League’s Las Vegas Raiders. He was a celebrity coach. In the years following his Super Bowl win as coach of the Tampa Bay Buccaneers, Gruden moved to television, to ESPN, where he was about as big a celebrity as the sports universe allows.

In 2018 he was lured back to coaching by the Raiders organization which gave him a 10-year, $100 million contract, as much money as any coach in the business.

It all came crashing down in the days following an Oct. 8 New York Times report on one racist email followed by a Times report on dozens of emails Gruden exchanged with a close friend, Bruce Allen, who was president of the Washington Football League. Their email exchanges continued until Gruden joined the Raiders.

The emails were obtained by National Football Team investigators who were looking into allegations the Washington team’s work culture was toxic, especially to women and especially the team’s cheerleaders.

In his email exchanges with Allen, Gruden used the most offensive racist, homophobic, and misogynistic language, and he used that language so casually it is clear his emails were the rule, not the exception.

At first, it seemed he could survive the revelations. The first story from The Times included only one email in which he used a classic, racist trope to describe the head of the NFL players’ union.

“I am not a racist,” Gruden declared. “I don’t have a racist bone in my body.”

But within hours, The Times reported on the existence of those other damning emails sent to Allen and others in the years Gruden worked for ESPN, including his time as color commentator on Monday Night Football.

As The Times reported, “In the emails, Gruden called the league’s commissioner, Roger Goodell, a “faggot” and a “clueless anti football pussy” and said that Goodell should not have pressured Jeff Fisher, then the coach of the Rams, to draft “queers,” a reference to Michael Sam, a gay player chosen by the team in 2014.”

Those revelations were too much for the Raiders organization. Gruden resigned Oct. 11 before he could be fired.

Of course, some Raiders fans and others immediately screamed “cancel culture.” In social media posts, the usual phrases popped up. “It was just locker room talk not to be taken seriously.” “Boys will be boys.” “No one was hurt, these were private emails, after all.” “It’s ancient history.”

Who could possibly be hurt?

How about those Washington cheerleaders who have filed several lawsuits alleging cruel harassment and invasion of privacy? The emails were initially released to the NFL as part of an investigation into the team’s toxic culture.

It does not take much to imagine how they hurt Carl Nassib, the first openly gay player in the NFL and a defensive lineman on Gruden’s own team.

Ancient history?  If we have learned anything in the last few turbulent years it is this: There can be no statute of limitations on hate.

Apologists can make excuses, but the fact is we know racist, homophobic, and misogynistic language hurts people, causes real damage, disrupts the social fabric, and leads directly to violence.

And yet, as enlightened as we might think we are, such language – and actions – continue to persist, and clearly not just in professional sports.

Gruden’s initial apology was weak, shockingly insufficient. Would a more effective apology have saved his job?

In my University of Idaho ethics classes, I talked about the nature of, and importance of an effective apology. It needs to be immediate. It needs to be unequivocal and devoid of excuses. And it needs to outline the steps to be taken to make certain the mistake never happens again.

Apologies are apparently not to be found in Gruden’s playbook.

What if his response had been this? “I am fully responsible for these emails and the offensive language and attitudes. I have no excuse. I know better. I understand these emails have hurt people, strangers, friends, and my players. I vow I will not repeat this mistake. I am taking a leave of absence from the team to begin a rehab process fully as rigorous as any substance abuse treatment program. I will not re-enter public life until I can demonstrate, sincerely, that lessons have been learned. I make no excuses for myself. Please don’t make excuses on my behalf.”

Would such an apology have saved Gruden’s career? Maybe not. But the point of that sort of apology is not to save a career, but to take responsibility.

Until the Gruden’s of the world – athletic or otherwise – begin to take responsibility for their actions, little is going to change. That is especially true if the Gruden debacle is seen only as a sports story.

Meanwhile, no need to cry for the cancelled football coach. Reports indicate the Raiders will negotiate a generous settlement for the remainder of Gruden’s contract. The scandal cost him his job, but he will be amply rewarded, likely walking away with tens of millions.

Previous Turning 40 and learning to be patient about love
Next The Jewel of Paradise: Prophet Muhammad (peace be upon him)