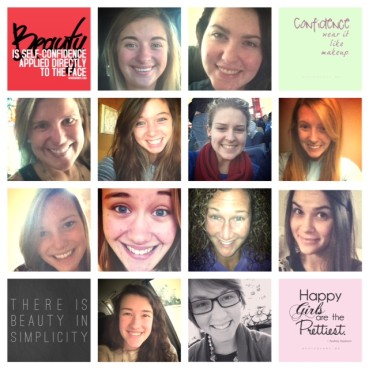 ‘No Makeup November’ inspires women to focus on inner beauty

Rave Ministries is coordinating “No Makeup November” during which women and girls of all ages put away their makeup in order to remember that they are made beautiful by God. Promotional poster photo courtesy Rave Ministries

(RNS) As countless men grow mustaches this month to raise money and awareness for men’s health issues, women and girls of all ages have put away their blush and mascara, seeking to remember they are beautifully made by God — even without the makeup.

“I think a lot of times we get so caught up in ‘God made the world and the trees and the beauty and nature’ and we see God’s handiwork in the leaves changing in the fall, or we see his handiwork at the beach,” said Becca Daniel, team leader at Rave Ministries.

“What we forget is we’re told in all those other Scriptures that God made us, down to the last detail too.”

Women and girls from 37 states and seven countries are participating in “No Makeup November,” which is coordinated by Rave Ministries, a Christian girls ministry associated with the Churches of Christ.

Although 1,000 people have registered at Rave’s website, Daniel estimates that the number of women participating in the challenge is closer to 4,000.

“This campaign in no way is an anti-makeup campaign, because let it be known that it is not the makeup that we are battling,” said Rave’s website. “Instead, it is a culture that we are trying to fight. A culture that tells our young girls, mothers, and yes, even grandmothers that they are not close to being good enough.”

Although No Makeup November is not about raising money for a cause like prostate cancer, Daniel said it’s still an awareness-raising campaign.

“It’s bringing awareness to true beauty and to taking off the mask,” Daniel said. “I believe that there’s a need because of the culture that we live in. It’s just very much beauty-saturated: ‘beauty’ meaning what’s on the outside.”

Becca Daniel, team leader at Rave Ministries, originally did not want to participate in the challenge, but said she has grown in her confidence by doing so. Photo courtesy of Rave Ministries

Rave Ministries first coordinated the campaign a year ago after Lauren King, another team leader and Daniel’s sister, saw videos made by Brooke Ferguson, a student at Lipscomb University. Ferguson had gone without makeup for 40 days during the summer of 2011 and made video blogs about the experience.

This November is the first year the campaign has really taken off, Daniel said.

Participants have built a community across the world as they encourage each other over Twitter, Facebook and Instagram using the hashtag #NMN. The team leaders at Rave have also posted regular devotionals and other words of encouragement to participants.

“There are some people who don’t go out of their house without it on,” Daniel said. “It has been difficult for some. Overall, I would say the most difficult place for girls and for women — for women especially — the place that is most difficult to go is church. And I found that ironic. I find it ironic because that’s the place where we’re supposed to feel the most comfortable about the way God created us.”

When her sister proposed that Rave run No Makeup November, Daniel did not initially want to participate. Although she did not wear makeup often, she needed it to feel put together for special events and work.

But now Daniel is glad she joined the event.

Katherine Burgess has lived in California, Cambodia and Tennessee. She has covered subjects as varied as a United Nations tribunal, church leadership conferences and a maximum security prison. She is currently based in Washington, D.C.