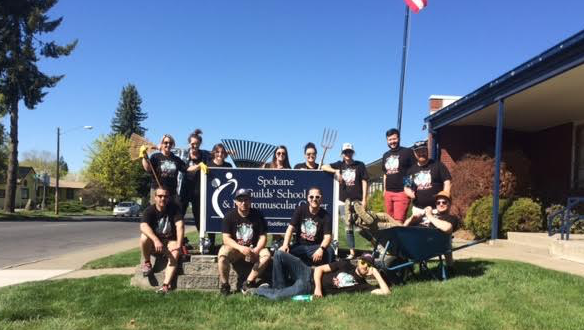 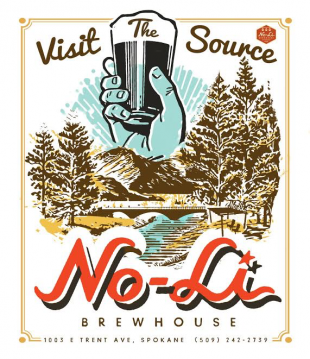 For a No-Li Brewhouse customer, a Monday LocALE purchase could mean a light summer ale on the patio, served in a collector glass etched with a Spokane-area landmark, such as the Perry Street Lorien’s Windmill.

But for residents at St. Margaret’s Shelter, located in the same neighborhood, a LocALE purchase helped put breakfast on the table last month.

The pay-it-forward LocALE Mondays are just one of many community development projects  Spokane’s No-Li Brewhouse, 1003 E. Trent Ave. #170, has hosted its through Giving from the Source program.

Community has been a big part of business for co-owners John and Cindy Bryant, since they bought the brewery in May 2015.

LocALE Mondays work like this: Customers visit Monday to purchase a featured beer, served in a pint glass, most recently designed by Chris Bovey (some may have seen his vintage Spokane prints hanging for sale in Atticus Coffee & Gifts). On the glass is a neighborhood and a featured landmark in that area, such as the Patsy Clark Mansion in Browne’s Addition, for example. After funds are compiled from the LocALE purchases, a team of No-Li employee volunteers go to that neighborhood and work on a much-needed project, organized in part by Spokane County United Way.

No-Li officer manager Tony Gonzalez is one of the handful of employees who volunteers about once a month at the various LocALE neighborhoods. During the most recent project, he helped serve breakfast at St. Margaret’s to the homeless women and children residents who were staying in the short-term housing shelter.

“You get to see the look of appreciation on their face,” Gonzalez said, adding the project was his favorite so far. “It really puts things in perspective.”

After their hard work, Bryant said the volunteer group bought beer and lunch at Perry Street Pizza, in an effort to support local businesses.

When customers attended LocALE Mondays in May, they netted a free Shadle Park neighborhood pint glass, etched with the park’s tall, striped water tower. The funds raised from those purchases went toward grounds work around the Spokane Guild School, a neuromuscular center for children who experience developmental delays and/or disabilities.

“To me that was huge,” Bryant said of the volunteer work, such as trimming bushes and laying bark on the playground. “These are children, and we are giving back to them and making their playground safer.”

They followed that hard work with a drink at the Brown Derby Tavern, another effort in supporting local business.

LocALE Mondays isn’t a new idea for the brewhouse. Last year, its Taste of Trade program provided pub customers who purchased a No-Li taster tray with a $2 token, for which they could use toward merchandise or donate to No-Li’s charity of the month.

“Instead of writing a check,” like last year, Gonzalez said, this year he found “donating our time and getting our employees involved is very valuable.”

In the future, a campaign called Give a Little, Get a Little will provide not just employees, but customers with a chance to volunteer. Bryant said a list of volunteer opportunities will be provided to customers, and those who volunteer a few hours will be provided something tangible, like a token or certificate, for which they can bring into the brewery for a free shirt or beer. Details about the campaign will be posted to No-Li’s social media accounts when information is set in stone.

Bryant said she thinks it’s important to teach her employees, especially the younger ones, how to serve the community.

“They’re busy,” Byrant said. “But if it’s presented to them, they’re all in.”

All in, like Gonzalez. He, along with Bryant, has attended nearly all eight LocALE volunteer projects.

“I’m not from Spokane, so the hardest part for someone like me is not knowing where to start,” the more than three-year employee Gonzalez said. “I’m shy. I couldn’t just go up and sign up to volunteer. If it weren’t for this, I’d probably be at home, curled up on the couch.”

Tags no li no li and community service no li brewhouse