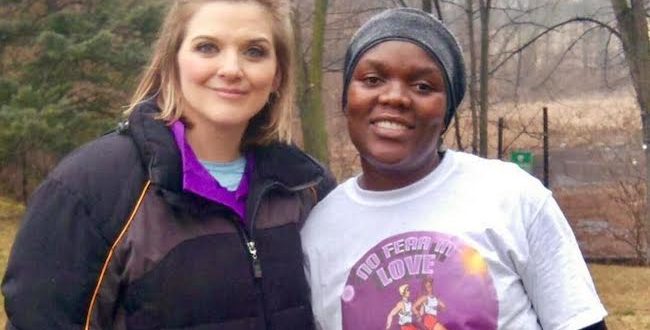 Karen Bontrager (left) with No Fear in Love Race Participant/Contributed

Karen Bontrager wants to celebrate 16-24 year olds so that they may know their self-worth and learn how to have healthy dating relationships as a result.

She started the No Fear in Love (NFIL) race to do just that, which is now in its 8th year and will take place on Saturday, March 2, at 6:29 a.m. (sunrise), on the campus of Gonzaga University.

The name of the race is based on the idea that experiencing fear is an early indication that something might be wrong or unhealthy in a relationship, and the race time at sunrise signifies moving from darkness to light, from unhealthy relationships to healthy ones, from fear to love.

“Everything about the race is powerful and transforming,” Bontrager said.

The race began in 2011 in Fairfax, Virginia., while Bontrager was a student at George Mason University.

That same year, she had left her own domestically violent relationship. She’d never been in a race nor had she seen one before. But while she was healing from her own violent situation, she caught hold of this vision to help young people start their journeys into healthy relationships.

The race was started in part as a response to Yeardley Love’s murder in 2010, while Love was a student of the University of Virginia. The murder was a result of her violent relationship with her boyfriend.

However, rather than focus on the negative stories like Love’s, Bontrager wants to use her race to be proactive about healthy relationships and head off troubles before they even occur.

Bontrager compares it to what breast cancer awareness campaigns have accomplished over the years. They’ve turned tragedies into something positive, so now when you see a pink ribbon, you are showing your moral support to women with breast cancer.

For the NFIL race, the pink ribbon is replaced with wearing purple for the race, and she longs for the day people will be able to see that color and know it stands for 16 to 24 year olds knowing their worth.

Her hope for today, however, is that young people will say to themselves in response to wearing the color purple for the race, “’I am royalty for a day, so maybe I should be in situations that are good for me.’”

“There has never been an event in history specifically dedicated to them knowing their worth,” said Bontrager. “When people talk about healthy relationships, they are normally talking about violence against women or what to wear sexually.”

Bontrager is not the only one excited about this race and what it can do for 16 to 24 year olds.

When she was attending Eastern Washington University in Cheney for her graduate degree in social work, she met up with a young man who was also a student there. His name is Dan Grishko, and he caught the passion for this concept and became an ambassador for the 2016 NFIL race that took place in Cheney.

“This race is important,” Grishko said. He shared that a lot of young people go through a crisis relationship that sets up their whole understanding of what relationships are.

“Their whole idea of a relationship gets messed up, and [they] end up going from one toxic relationship to another,” Grishko said. “They never really realize what self-love is and their self-worth [and] end up seeking validation from relationships with people who don’t care about them.”

According to the race’s website, this year’s course is six miles long and flat, and it will be on a scenic, point-to-point course on the Centennial Trail. It starts at the north end of the campus and, after two loops, proceeds directly to the start at Gonzaga’s Law School. When the race ends, there will be a discussion about promoting healthy relationships at the John J. Hemmingson Center on campus.

Her ultimate desire for the race is to be able to raise enough funds to offer full or partial scholarships to teen-dating violence survivors from local Spokane-area schools and other universities.

Bontrager and the board that organizes the race are still looking for runners, sponsors for the timing and scholarships, and volunteers.

If participants register by Feb. 25, they are offering a discount of 12 percent off the ticket price of $27 per runner, for a team of two racers or more.

You can visit the NFIL website www.nofearinlove.org for more information about the race or sign up directly at race’s registration site.

When Bontrager is not working on her race, she works with 16-24 year old boys in a program called “Crisis to Courage,” is the CEO of No Fear in Love Counseling, and is the former host of the “16 to 24 Year Olds Voice” on Spokane Talks, which she hopes to start working on again.

Previous The Dangers of Categorizing Faith
Next Ask An Atheist: Explaining without offending