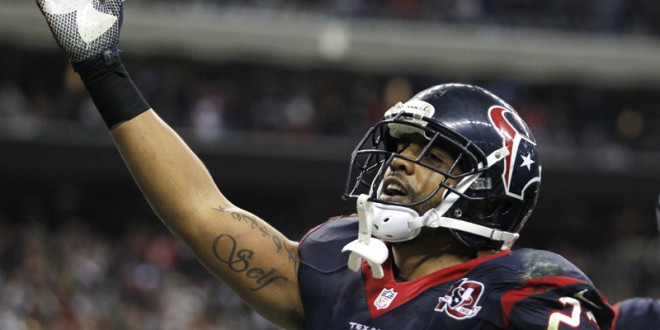 Houston Texans running back Arian Foster celebrates after scoring a touchdown against the Cincinnati Bengals during the third quarter of their NFL AFC wildcard playoff football game in Houston, Texas on January 5, 2013. Photo courtesy of REUTERS/Tim Sharp *Editors: This photo may only be republished with RNS-TURNER-COLUMN, originally transmitted on August 11, 2015.

NFL Pro-Bowler is an atheist. So what?

(RNS) Earlier this month, NFL star Arian Foster, a running back for the Houston Texans, sent ripples through the world of professional football when he came out as a nonbeliever in the pages of ESPN The Magazine.

Though he is not exactly an atheist — Foster told reporter Tim Keown he shuns that label and believes in “nothing” — Foster offered a counternarrative to the overwhelmingly Christian world of professional football and the college football system that feeds it.

“Everybody always says the same thing: You have to have faith,” Foster, who is 28, says in the magazine. “That’s my whole thing: Faith isn’t enough for me. For people who are struggling with that, they’re nervous about telling their families or afraid of the backlash … man, don’t be afraid to be you. I was, for years.”

And while there are certainly other football players with nontraditional religious beliefs, Foster is the only active professional football player who has been open about his nonbelief. And he’s a star who has run more than 6,000 yards, played in four Pro Bowls and has a five-year, $43.5 million contract.

Yet the reaction has been underwhelming. The story was widely shared on social media but generally has received a collective shrug from football fans and professionals. There have been no protests by angry religious people outside Foster’s Houston home, no picketers outside the NRG Stadium where the Texans play. Speaking on NPR’s “Here & Now,” sports commentator Mike Pesca said, “I can’t imagine this causing any sort of problem, even in the Texans’ locker room.”

A Houston Chronicle headline summed it up this way: “Arian Foster is an atheist. So what.”

But it has raised an interesting question. Will Foster’s “coming out” as a nonbeliever prompt other players who are not religious or not Christian to share their viewpoints? And does this signal that professional football, with its postgame prayers, team Bible studies and proselytizing Christian coaches such as Tony Dungy and Andy Reid, may be moving away from its Christian roots and sensibilities?

“I don’t think it matters that Arian Foster came out as an atheist,” said Chad Gibbs, author of “God & Football: Faith and Fanaticism in the SEC.” “Certainly not in the NFL. If he’s scoring touchdowns, fans and teammates wouldn’t care if he said he worshipped the flying spaghetti monster. If he doesn’t play well, no matter how religious or irreligious he is, he’ll be shown the door, just like (evangelical Christian quarterback Tim) Tebow in Denver.”

But Lee DelleMonache, director of the Catholic-oriented Institute for Sport, Spirituality and Character Development at Pennsylvania’s Neumann University, said she is encouraged by Foster’s coming out and especially by his friendship, outlined in the ESPN story, with the Baltimore Ravens’ Justin Forsett, a devoted Christian.

“There is a wonderful lesson in that and the lesson is in tolerance and respect and in the strength of what one believes in,” DelleMonache said. “Isn’t that what we want in the world?”

Foster is not the first NFL player to identify as a nonbeliever. Robert Smith, a former Minnesota Viking, said in 2006 he did not believe in God, and Sports Illustrated reported that Pat Tillman, an Arizona Cardinal who was killed while serving in the military in Afghanistan, was an atheist. And Chris Kluwe, also a former Viking, has been speaking on the atheist conference circuit for several years.

So why the ESPN magazine spread?

Tom Krattenmaker, author of “Onward Christian Athletes: Turning Ballparks Into Pulpits and Players Into Preachers,” says it’s the other side of the Foster story that is the real news — it’s not that professional football has evolved enough to accept a nonbeliever, but that nonbelief in America has grown so acceptable it’s now mainstream.

“It parallels what I observed with evangelical Christians,” Krattenmaker said. Christian ministries that focus on athletes, such as Athletes in Action and Fellowship of Christian Athletes, encourage players to share their religious stories — their testimonies — and then give them a platform on which to share it.

Foster had the help of Openly Secular, an organization that encourages atheists, humanists and other freethinkers to “come out” and that stood behind Foster as he went public about his lack of faith. He made a video for the organization’s website about his nonbelief before the ESPN story appeared.

“This is like the mirror image of that,” Krattenmaker continued, “only on the secular side.”

So it’s a step for football, Krattenmaker said. And as long as Foster plays the game — and plays it well (though he is currently on the disabled list, recovering from an injury sustained in practice) — expect the shrugging to go on.

“Fans and management are probably not concerned that the guy is not religious,” Krattenmaker said. “I am glad, though not totally surprised, that fans are accepting of it.”