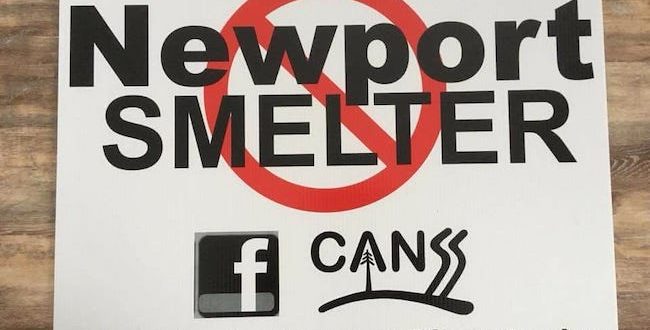 On Wednesday, May 22, the Interfaith Climate Change Committee (ICCC), led by 350 Spokane, met with aides to Gov. Jay Inslee to discuss the construction of the Newport Smelter, just south of Newport.

One of the ICCC’s representatives, Tracy Morgan, attended the meeting and expressed concerns for the damaging effects the smelter may have on nearby areas.

“We are very concerned that a small and destitute community, along with its neighbors the Kalispel Tribe, are considered sacrifice zones for pollution,” Morgan said. “There is disparity when deliberately targeting poverty stricken and marginalized communities for pollution.”

The Kalispel Tribe of Indians is less than 20 miles from the Newport smelter site. The town of Newport is less than 1.5 miles away from the smelter.

Officials from the smelter’s parent organization, PacWest Silicon, claim it will create 150 jobs when fully operational, according to the Spokesman Review. However, Morgan does not believe it is a legitimate justification for the construction.

“This is a form of economic blackmail – yes it is hard to refuse jobs of any kind when you are desperately poor,” Morgan said.

The ICCC represents a number of churches and invited the Faith Leaders and Leaders of Conscience to join the conversation, according to Morgan. This included Morgan’s spiritual home, the Sravasti Abbey.

Blake Baldwin, Director of Outreach for Gov. Inslee provided a statement following the meeting, making it clear that his was less of a participatory role in the discussions and and instead would pass the ICCC’s concerns on to the governor.

“We appreciate these faith leaders in the greater Spokane and Northeast Washington area for taking the time to meet with the administration to share their thoughts and concerns regarding the proposed silicon smelter in Newport,” Baldwin said. “The governor’s position on this project remains neutral as it awaits the rigorous and required environmental review process.”

The environmental review process is being led by the Washington State Department of Ecology (WSDE).

Ryan Lancaster, WSDE’s media contact stated that the Department will conduct an ecology review of the smelter to provide a more comprehensive scope of the environmental impact.

“Our responsibility as the lead agency under SEPA requires us to complete an objective review,” Lancaster said. “The study will be an impartial, comprehensive document used as resource for future decision-makers and the public to evaluate the company’s permit applications.”

PacWest Silicon seems confident that the Newport Smelter will pass the WSDE’s review and claims that it will continuously monitor its environmental impact.

A statement on PacWest Silicon’s website reads, “There will be daily monitoring of the facility’s emissions to insure the facility is operating in accordance with the requirements of the permits and approvals. If there are violations, the facility will be subject to enforcement actions by the Washington State Department of Ecology. Any significant changes to the project would require review and approval by the agency(s) involved and a formal amendment to the permit(s).”

The Environmental Impact Statement (EIS) was started in September 2018 but was placed on hold in February 2018.

“Shortly after the public comment period closed the project landed in a holding pattern,” Lancaster said. “We have not communicated with the company since early February and haven’t been working on the project. We’ll move forward if the company indicates they’re ready to continue and also applies for an environmental permit.”

Lancaster claimed that the Smelter will have to continue with its application for an environmental permit if they wish to begin operating. With no communication from PacWest since February, the WSDE does not have a timeline on when it will have a completed Environmental Impact Statement or when the mine will begin operations.

Until then, groups like the Interfaith Climate Change Committee and 350 Spokane will continue to advocate for the eradication of the Newport Smelter.

Previous I Will Not Look Away
Next Book Review: Charleston Church Massacre, Forgiveness and Gun Control