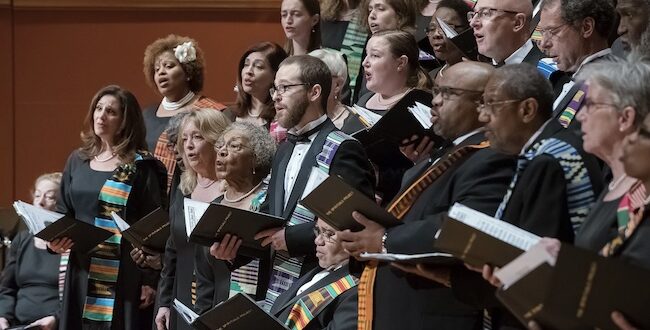 The Spirituals Project Choir performs in Denver, Colorado, in 2018. Photo courtesy of the University of Denver

Zion Earle, a member of the youth choir at the Hamilton-Garrett Center for Music and Arts in the Roxbury neighborhood, sings Negro spirituals like “My Lord! What a Morning” at concerts in the Boston area.

She and the other teenage girls in the choir also learn about the hopeful lessons and coded messages in songs like that spiritual, in which enslaved people sang “done quit all my worldly ways, join that heavenly band.”

The center that teaches Earle, a Black American with Jamaican and Cuban roots, and other students at its academy has been for the past year a recipient of funds through a Negro Spiritual Royalties Project of the nearby United Parish in Brookline. It is one of at least a dozen churches and organizations across the country committed to monetarily acknowledging spirituals that have been sung for centuries.

“We pledge that each time we sing Negro Spirituals in our worship: We will sing them with holy reverence and open hearts; We will honor the unnamed enslaved people who composed them in our prayers,” reads a statement in the bulletin one summer Sunday when the congregation sang “Lord, I Want to Be a Christian” and “There Is More Love Somewhere.”

“And we will pay royalties from the funds collected in the offering plate to Hamilton-Garrett Music and Arts.”

The congregation has sent $12,900 so far to the organization that works to support young musicians of color and preserve Black music, including Negro spirituals.

Hamilton-Garrett President Gerami Groover-Flores said her nonprofit, which was birthed out of the Historic Charles Street African Methodist Episcopal Church in Roxbury, is proud to be the first recipient of the program spearheaded by Susan DeSelms, the white minister of music at the Brookline church.

Groover-Flores, the African American musician who also serves as the center’s artistic director, said it is using the contributions to support its operations and aid those inner-city students who otherwise would be unable to afford the $800 annual tuition at its after-school academy.

She sees the program as not only a way to bring recognition to the unnamed creators of the songs but also to bring awareness to other programs that teach and sing spirituals and have not received sufficient financial support.

“The descendants of the people who created this music are still here and still alive,” said Groover-Flores. “And even if we do not know the names of their ancestors or who the composer is, we can do our part in acknowledging the work that their ancestors have contributed to this body of music that we appreciate today.”

Others have latched onto the project, including four churches that have given donations in support of the royalty project, a Hamilton-Garrett spokesperson said.

“It’s really straightforward,” said DeSelms, of why the Brookline church created the program. “This is music that we nonchalantly borrowed for hundreds of years and didn’t consider the fact that people wrote it and people created it and those people were never recognized.”

“This offers students of color in this neighborhood that would never have the opportunity to study music the opportunity to do so,” said Tom Jones, minister of music at the mostly white Cambridge church that started its Negro Spirituals Initiative in late 2021. “And that’s how we can pay it forward.”

M. Roger Holland, director of The Spirituals Project at the University of Denver, said he’s noticed this particular recent interest in Negro spirituals that, as folk music, have no copyright and are in the public domain.

“It seems to have picked up some steam within the last couple of years, particularly since the George Floyd murder,” he said of the 2020 killing of a Minneapolis Black man at the hands of a white police officer.

“I think it’s really admirable that certain communities are seeking to give back, to sew into, to participate in the rebuilding, the repair of the damage that has been done to the Black community for over 400 years in this country.”

The United Church of Christ Musicians Association held a webinar in February about the concept and donated $1,000 in proceeds from it to the Roxbury academy.

Jim Boratko, director of worship arts at First Church of Christ, Congregational in West Hartford, Connecticut, hosted the webinar for the independent association. His predominantly white suburban church started its Royalties for Spirituals program that same month and has made a $1,600 donation to Hartford’s Artists Collective, an education program that exposes the community and students to the artistic and cultural contributions of the African diaspora.

Although neither DeSelms nor Groover-Flores calls the project in which they are collaborating “reparations,” others use that term in connection with prospective projects, which may involve a new budget item or a regular collection or donation per spiritual.

The Hymn Society’s Center for Congregational Song devotes four pages on its website to a “Reparations Royalty Pilot,” to help congregations consider a series of questions to determine how they might pursue such a program. Brian Hehn, the center’s director, said more than 30 congregations have expressed interest in the concept since September 2021, and about 15 churches were represented at a related Zoom meeting in August.

“Ultimately, much of the conversation centered around how to make sure that it doesn’t become a purely transactional model,” Hehn said in an email to Religion News Service, noting the goal of building relationships across racial and socio-economic lines.

The pilot was inspired by Adam Waite, music minister at Denver’s Montview Boulevard Presbyterian Church, which approved a $250 contribution to a fund “each and every time a Negro Spiritual is sung in worship or concert by the congregation or choir, beginning September 2022 through May 2023.” It plans to donate to nonprofits related to Black artists and will then assess its own pilot program to determine if it will continue.

Waite, who said he and DeSelms came up with the same idea around the same time, said the leadership of his predominantly white church had been looking for a next step after an anti-racism workshop. He recalled a long-ago explanation to his father, a New York brew pub owner, about why he had to pay royalties to companies like ASCAP (the American Society of Composers, Authors, and Publishers) and BMI (a music rights management company) for the music that played in his establishment.

“It’s a reminder to us of the contributions that the spirituals have made,” he said of the new program that puts a sharper focus on a music genre that has significantly influenced Protestant music in particular and American music in general.

On a denominational level, the United Church of Canada is using what it calls “a theology of copyright” in its development of a new hymn resource called “Then Let Us Sing!” The church hopes to hold copyright for some of the songs in collaboration with All Africa Conference of Churches and Federación Universal de Movimientos Estudiantiles Cristianos en América Latina y el Caribe (World Student Christian Federation in Latin America and the Caribbean) so they get royalties for hymns originating from countries like Cameroon and Uruguay.

“Then Let Us Sing!” planners also hope to give royalties to African American musicians who provide new arrangements to spirituals, said the Rev. Alydia Smith, the church’s program coordinator of worship and music.

DeSelms and other creators of spirituals royalty projects say they have tried not to rush into them to ensure they handled the process carefully, seeking advice from experts, collaborating with eventual recipients and leaving the decisions about how funds would be used to them.

“This is not charity; this is a payment, a royalty payment,” said DeSelms, whose church is triply aligned with the United Church of Christ, the United Methodist Church and American Baptist Churches USA. “And we have owed it for a long time.”

For her part, Earle, the Hamilton-Garrett student, is appreciative of the attention to the music she sings a cappella with her choir members.

“It’s a real honor,” she said. “It’s like an opportunity for our history to be known and not go unnoticed.”

[…] Simmons 8 hours ago News Leave a comment 115 Views ByZion Earle, a member of the youth choir at the Hamilton-Garrett Center for Music and […]