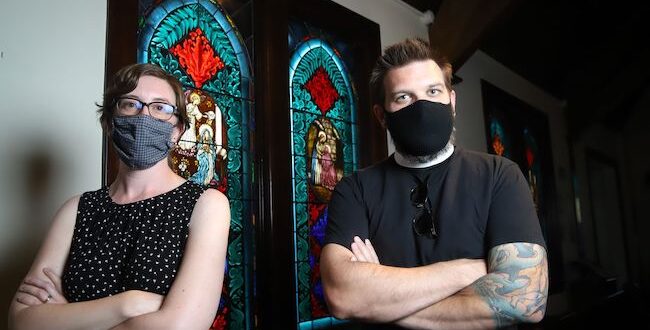 When the Rev. Jonathan Myers became the vicar of West Central Episcopal Mission in 2017, something didn’t sit right with him.

The name of the organization didn’t seem to fit.

“I had a visceral reaction to the word mission,” he said, explaining that the word seemed to imply that the intention was to impose their beliefs on others. “It had a patronizing tone to it.”

So after much discussion and planning, the ministry has been re-branded as The West Central Abbey.

The 1-acre property houses the historic Trinity Chapel, where the ecumenical congregation Creator’s Table worships, a vicarage, the commons, which has a dining hall that serves free meals weekly to those who are in need and has a small farm operating on it.

“When I got there, I saw people hanging out there a lot, I saw multiple groups using the space, and I felt it functioned more like an urban monastery than a mission,” said Myers, who lives on the property.

New Monasticism is a growing Christian movement, according to Jonathan Wilson-Hartgrove author of, “New Monasticism: What It Has to Say to Today’s Church.”

“Many New Monastics are married with children … its members live radically, settling in abandoned sections of society, committing to community, sharing incomes, serving the poor and practicing spiritual disciplines,” he wrote.

The West Central Abbey aims to be similar to that, “a sacred place in the heart of West Central where all are invited to co-create justice, joy, compassion and peace.”

Shedlock said the Abbey is a Christian ministry, but her hope is that all feel welcome there.

She is a Methodist pastor who lives across the street from the Abbey and leads Creator’s Table with Myers, who is an Episcopal priest. Because of COVID-19, the congregation is meeting virtually.

“Creator’s Table is a space we keep for Sunday worship and I think the Abbey is what connects the worshipping to the other endeavors, like the farm and some other partners,” she said.

Heather Berndt, who is leading spirituality in the arts programming at the Abbey said the focus is on creating community in West Central and beyond.

“I feel like there’s a huge need for that safe place for someone to be who they are, whether they are questioning, wondering, curious, pissed or whatever that might be,” she said. “It’s a place to be welcome and to explore and there’s a monastic underpinning to it and monastics are very much about welcoming and hospitality. It’s about exploring faith, it’s not about a lot of big answers.”

She added that it’s a timely endeavor that’s needed particularly in the West Central Neighborhood, which she said is on the edge of gentrification.

“The monastic tradition is committed to the value of stability. Stability of heart and place. I think this is important for any time, but especially now,” Berndt said.

A local group of the Third Order Franciscans, an Episcopal group that desires to live a deeper life according to Franciscan care-ism, is part of the Abbey community. Before COVID-19 members were gathering monthly on the property.

David Milliken, a member of the order, said he sees the Abbey as a “restored Eden” – a space people are drawn to because it gives them a sense of peace and offers them a place for reflection.

He said the Abbey’s commitment to growing food and serving those in need was particularly important to him.

“When we started looking at the idea of how to work the land and serve creation and engage creation, as well serving those on the margin and struggling, it was a no brainer. This is our Franciscan path. This is what we’re about and have been about for over 800 years, why aren’t we gathering there? That place needs us and we need that place,” he said.

Since groups are unable to gather in person at the Abbey for now, the organization has created a patreon page (patreon.com/westcentralabbey) where members can support the ministry and stay connected digitally through the arts, workshops and a marketplace.

Previous We can hurt God? Certainly.
Next Ask An Eastern Orthodox Christian: Why Are Priests Called Father?