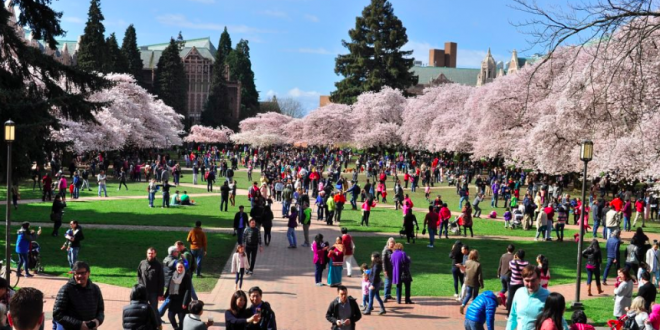 People crowd the University of Washington quad to view cherry blossoms in Seattle in April 2017. Photo by Joe Mabel/Creative Commons

SPOKANE, Wash. (RNS) — A new state law makes it easier for college students to take time off for religious holidays.

Gov. Jay Inslee signed Senate Bill 5166 into law on Monday (April 29), making Washington the first state requiring that institutions of higher education provide academic accommodations to students who need them for religious observances. This includes rescheduling exams and permitting absences, as long as the student notifies the professor of the needed accommodation within the first two weeks of class.

College professors will also be required to add information about religious accommodations to their syllabuses.

The law requires colleges “to reasonably accommodate students who, due to the observance of religious holidays, expect to be absent or endure a significant hardship during certain days of the course or program,” according to the state Legislature’s website.

“Passing this bill sends a powerful message to all students that students of faith, and especially those in minority faith traditions, matter and are welcome in our educational system,” said Rabbi Allison Flash, assistant director of education at Temple Beth Am of Seattle.

Flash, along with other faith leaders, has been advocating for this legislation. It’s a step forward, she said, for Washington’s educational system.

“Students should not have to choose between upholding their academic responsibilities and honoring their faith traditions. This bill allows students of faith to honor both parts of their lives,” Flash said.

The idea for this measure came in 2017 when University of Washington student Byron Dondoyano decided to observe Ramadan with his Muslim peers.

“I did it for a week and it was really tough,”said Dondoyano, who is not religious.

Around the same time, he saw an article about UW-Bothell Professor Bryan White, who held finals after sunset for his Muslim students.

The article prompted Dondoyano to look at university policies regarding religious accommodations. What he discovered, he said, was inadequate and hard to find.

“They weren’t empowering students to request accommodations,” he said. “In this political climate, I felt something needed to happen.”

He teamed up with his Muslim classmate Mennah El-Gammal to work on changing UW policies.

Later, the pair met state Sen. Bob Hasegawa at a lobby day, and he agreed to sponsor their efforts as a statewide bill. Soon after, members of the Council on American-Islamic Relations, the Jewish Federation of Seattle, the Anti-Defamation League and other organizations threw their support behind the students’ idea.

“It has really been a team effort,” Dondoyano said. “These religious accommodations aren’t just a problem for one religion. It’s something everyone can get behind.”

Dondoyano, a junior majoring in law, societies and justice, hopes that Washington’s actions to protect religious students will inspire other states to do the same.

J. Cody Nielsen, founder of Convergence on Campus, a nonprofit organization that supports religious, secular, and spiritual diversity within higher education, said the bill sends a message that “all forms of religious identity” are welcome on campus.

“Requiring institutions to take seriously the religious accommodation needs of students in the classroom goes a long way toward ensuring that institutions are upholding the 1st Amendment’s Free Exercise Clause,” he said.

Previous The Strength Of The Invisible Rope Of Faith
Next Ask An Evangelical: How do we know who the false prophets are today? 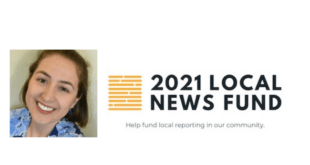 Emma found her way to SpokaneFāVS in the summer of 2021 when a friend told her about opportunities to freelance.