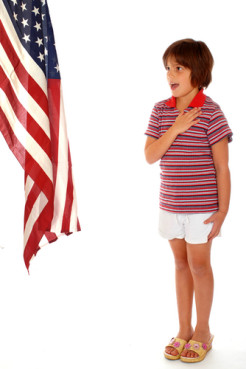 Elementary girl saying the Pledge of Allegiance toward a large American Flag. Photo courtesy of glenda via Shutterstock

(RNS) The American Humanist Association is suing a New Jersey school district for its recitation of the Pledge of Allegiance in public classrooms.

The lawsuit, brought on behalf of a local family in central New Jersey, asserts the mandatory recitation of the pledge is discriminatory against nonbelievers because it includes the phrase “under God.”

The first such case, also brought by the AHA, is awaiting a decision in the Massachusetts Supreme Judicial Court.

“It’s not the place of state governments to take a position on god-belief,” said Roy Speckhardt, executive director of the American Humanist Association. “The current pledge practice marginalizes atheist and humanist kids as something less than ideal patriots, merely because they don’t believe the nation is under God.”

Roy Speckhardt, executive director of the American Humanist Association and the Center for Humanist Activism, speaks at the launch of a new political action committee during a Washington press conference on Sept. 18, 2013. RNS photo by Katherine Burgess

A lawyer for the school district responded to the lawsuit by saying the district is following a state law that requires schools to have a daily recitation of the pledge.

The AHA argues the pledge violates the New Jersey Constitution’s protection against discrimination due to “religious principles, race, color, ancestry or national origin.”

The Pledge of Allegiance did not contain the phrase “under God” until 1954 when it was added by a vote of Congress as a protection against “godless Communism.”

Previous Attention
Next How are you willing to help SpokaneFAVS?