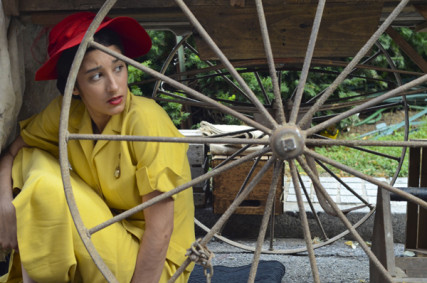 Actress Grace Srinivasan as Noor Inayat Khan in a scene from “Enemy of the Reich: The Noor Inayat Khan Story,” a film about an Indian-American Muslim woman who worked for the British as a spy in Nazi-occupied Paris. Photo courtesy of Unity Productions Foundation

Yet to Emmy Award-winning film director Rob Gardner, Khan was in many ways a mystery.

“How do you explain this person who wrote children’s stories and who grew up in a spiritual home to all of a sudden be fighting against the Nazis?” he asked.

Gardner has just completed “Enemy of the Reich: The Noor Inayat Khan Story,” about the Indian-American Muslim woman who worked as a British spy in Nazi-occupied Paris. He hopes his film will introduce this unlikely heroine to millions of Americans. The film premiered at the Warner Theatre in Washington, D.C., earlier this month. It travels to 14 cities between March 15 and May 4 and will be broadcast on PBS later this year.

The film’s genesis goes back to producers Alex Kronemer and Michael Wolfe, who were approached separately by Holocaust survivors from France, each with a story about how they had been helped by Muslims. Neither Kronemer nor Wolfe had heard of Muslims who had done anything brave or heroic during World War II.

The crew films a scene from “Enemy of the Reich: The Noor Inayat Khan Story,” about an Indian American Muslim woman who worked for the British as a spy in Nazi occupied Paris. Photo courtesy of Unity Productions Foundation

“Having both these conversations in such a short time, we felt the universe was speaking to us, and we decided to look into this further,” said Kronemer, who has worked with Wolfe and Gardner on several other films exploring Islamic topics.

What they found was a plethora of stories about Muslims who hid Jews, aided the Allies and fought the Nazis.

For example, doctors at the Franco-Muslim Avicenna Hospital in Bobigny treated American and other Allied soldiers, while a French Jewish cabaret singer, Simon Halali, was given refuge in Paris’ Grand Mosque and renamed Salim Halali.

The filmmakers knew they wanted to tell a story about a Muslim who did something heroic during World War II, because so few stories are known. Khan’s story was the most alluring because of her deep spirituality.

“What made her compelling was that she had this inclusive humanity,” said Kronemer. “The Nazi ideology was opposed to everything she believed in, and she couldn’t sit on the sidelines and do nothing.”

Khan’s father was a Sufi Muslim leader from India who in the years before World War I traveled to America to teach Sufism. There he met Albuquerque-born Ora Baker, married and moved to Moscow, where Noor was born in 1914. The family moved to London shortly afterward, then to Paris. Visitors came to hear her father preach and teach, and young Noor soaked in her father’s spirituality and values.

A Nazi soldier stands near a train in a scene from the film “Enemy of the Reich: The Noor Inayat Khan Story.” For use with RNS-REICH-FILM, transmitted on February 24, 2014, Photo courtesy of Unity Productions Foundation

She went on to study at the Sorbonne and became a successful children’s writer, publishing both in children’s magazines and a collection of short stories. In 1940, ahead of the Nazi invasion of France, Khan and her family fled to England.

There, she joined the Women’s Auxiliary Air Force as a wireless radio operator and was soon recruited by the Special Operations Executive, a covert unit created by Winston Churchill and tasked with getting behind enemy lines to help local Resistance fighters.

In 1943, she was sent to Paris to work as a radio operator between London and a local spy network. But the Prosper Network, as it was known, was betrayed, and most of the agents were arrested.

Khan eluded arrest for about four months, constantly changing locations and sending messages to London even as the Nazi police trailed her with wireless radio detectors.

She was captured in October 1943, imprisoned and executed at the Dachau concentration camp in Germany in September 1944.

Filmed mostly in Baltimore and Washington, D.C., with actors from the local stage scenes, “Enemy of the Reich” tells Khan’s story, interspersing segments from scholars and relatives who talk about her life. Academy Award-winning actress Helen Mirren narrates.

Telling stories about Muslims who resisted or fought the Nazis is important, many scholars say, because they challenge assertions that Muslims are anti-Semitic and show that Muslims and Jews can cooperate for a greater good.

The crew films a scene from “Enemy of the Reich: The Noor Inayat Khan Story,” about an Indian American Muslim woman who worked for the British as a spy in Nazi occupied Paris. Photo courtesy of Unity Productions Foundation

“My theory is that in the places where Nazi persecution of Jews occurred in largely Muslim environment — like North Africa, Albania and Bosnia — the proportion of non-Jews who risked their lives to save Jews is the same as that of the European Christian population,” said Robert Satloff, executive director of the Washington Institute for Near East Policy and author of the 2006 book “Among the Righteous: Lost Stories From the Holocaust’s Long Reach into Arab Lands,” which explores Arab resistance to the Nazis.

Satloff estimates that among both Muslims and Christians in Nazi-occupied lands, most people were bystanders, some were collaborators, and a smaller number were resisters. Now that the first few stories of Muslim heroes in World War II have emerged, many more are sure to follow, Satloff predicted.

Khan’s story left an impression on Imam Mohamed Magid, president of the Islamic Society of North America, who visited Dachau in 2013 as part of a Jewish-Muslim group in a trip designed to educate Muslim American leaders about the Holocaust.

Magid, who had heard about Khan a few months before the visit, figured she never had funeral prayers said for her, and so he delivered the prayers along with other imams on the trip.

“Tears were in my eyes,” said Magid. “It was hard to think about how she died, and the pain. But I was also very proud to identify with her at that moment.”

Previous Practice your own religion, but don’t persecute others
Next PJALS Conference to focus on nonviolent alternatives to conflict