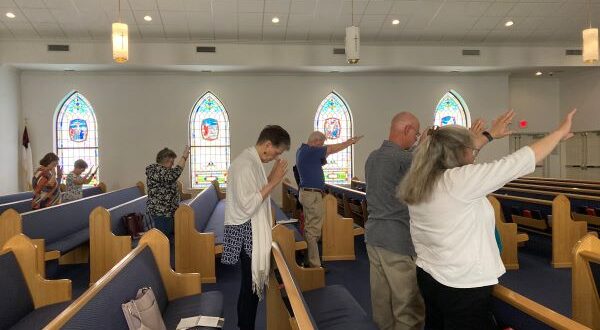 Congregants at Mount Zion UMC Church in Garner, North Carolina, attend a livestreamed worship service from the Wesleyan Covenant Association meeting in Indianapolis on May 6, 2022. RNS photo by Yonat Shimron

The Wesleyan Covenant Association’s 6th annual gathering was broadcast live at dozens of local churches across the country and encouraged churches to move into a new denomination.

GARNER, N.C. (RNS) — Fourteen United Methodists gathered in a sanctuary of a church Saturday (May 7) to watch a daylong broadcast of inspirational sermons from a group of Christians promising to lead them out of the wilderness and into the Promised Land.

The 6th annual gathering of the Wesleyan Covenant Association was broadcast live from Indianapolis to dozens of local churches across the country that are considering leaving the United Methodist Church for a new denomination they said is more orthodox in its adherence to Scripture.

The Global Methodist Church, a new theologically conservative denomination, was formally launched last week, emerging after decades of rancorous debate over the ordination and marriage of LGBTQ United Methodists. The liberal wing of the church would like to extend full rights to LGBTQ people; conservatives adamantly oppose it.

“We’ve been interested in renewal in the United Methodist Church and what might come of that for a long time,” said the Rev. Leonard Rex, the pastor of Mount Zion, which holds one Korean-language and three English services each weekend.

Rex said he attended the first gathering of the Wesleyan Covenant Association, which has been helping usher churches into the new denomination, in Chicago six years ago and that his interest in joining the new group has only grown since.

The dozen mostly elderly members of his congregation who watched the live broadcast from Indianapolis’ Kingsway Christian Church mostly agreed.

“We are concerned about the future of our faith,” said Elaine Heintzelman, the church’s pianist.

Heintzelman said she felt the United Methodist Church was “following the world’s culture and dictates rather than sticking with the principles of the Christian faith.

“We’re not dictated by politics but by God’s laws,” she said.

The theme of Saturday’s conference was “More than Conquerors,” a reference to the Apostle Paul’s Letter to the Romans, which encouraged the early Christians through persecution and struggles.

While some conservative churches have formally declared their intention to leave, the process of officially separating from the United Methodist Church is still being worked out, and many churches are in a holding pattern as they weigh their next step.

But as Keith Boyette, who next month begins his role as chief executive of the Global Methodist Church, told those watching the broadcast: “Separation is no longer in the future,” he said. “Separation has occurred.”

Boyette was one of a half-dozen preachers who spoke from Indianapolis, building on a theme of exile and return from the Bible’s Exodus story in which the ancient Israelites wandered in the wilderness after they left Egypt before crossing into the Promised Land.

Speakers also gave a nod to King Cyrus, who, according to the Bible, ended the Jewish exile in Babylon and allowed the Jews to return to Jerusalem and rebuild their temple.

“I view myself as your servant to help us in the wilderness get to the Jordan,” said Jay Therrell, the newly elected president of the Wesleyan Covenant Association.

Many other United Methodist churches will be learning about how to begin the process of dissolving their ties to the denomination later this month when regional groups, called conferences, begin their annual meetings.

“It’s incredibly exciting,” said Barbara Taylor, 75, of Raleigh. “It’s getting back to what the church was intended to be in (the New Testament book of) Acts. It’s about preaching and teaching without huge administrative overhead and doing what we were meant to do as a church.”

Previous Ways to increase the income of your church
Next Reach for the Stars: 4 Benefits of Life Coaching Everyone Should Know