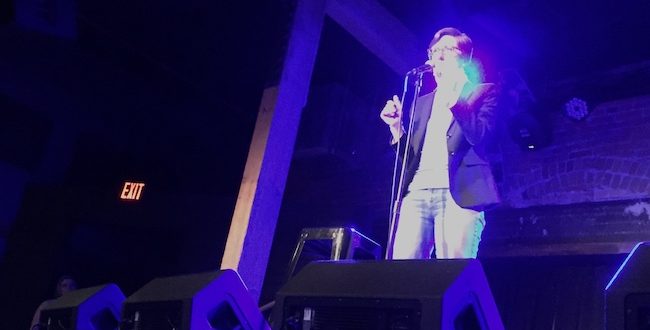 God and religion made its way into many poems at the Spokane Poetry Slam WOWPS qualifier on Feb. 5, but only one pastor stood up and delivered verse about why she cusses at church.

“… because far too long the white, middle-class church has sacrificed honesty on the altar of politeness …”

Snaps rippled though the crowd.

This is what Shedlock wants church to be like – fun, creative, communal, messy.

That’s why four months ago she started “the Studio” – a congregation described on social media as a “queer-celebrating, whiteness-deconstructing, empire-destabilizing, radically joyful, wildly creative, courageously nonviolent, beautifully redemptive community of Jesus-followers, truth-seekers, and beauty-lovers, for people who are tired of religious (B.S.) and in search of a spiritual home.”

Shedlock is a pastor at Audubon Park United Methodist Church, of which the Studio is an offshoot congregation. So far there’s been two services – one for All Saints Day and one for Christmas. The third will be this week – an Ash Wednesday service a day early, on Tuesday. The goal, Shedlock said, is to have weekly services.

“I come out of the mainline Protestant worship tradition, and there’s so much art in a traditional worship service,” said Shedlock, who studied theater in undergraduate school. “You have music, you have poetry in the liturgy, you have a script you follow. You have so much art, yet church is, in my opinion, really boring.”

Yet, she remains committed to the church because, she said, “God still uses it to transform the world into a more merciful, more beautiful place.”

In theater, she explained, there are two stages. The mainstage is where audiences see polished performances. The studio, often in a basement, is where experiments happen, where edgier things happen. And that, Shedlock said, is more interesting. So at the Studio, they try different approaches to worship – monologues, art, music.

Like at the the Studio’s Christmas service, where Mother Mary came out and performed an opening monologue “SNL” style.

Or for the All Saints service where at roundtables attendees drew pictures of their favorite saints – the people in their lives who had been saints to them.

Music at the Studio is not typical worship, either. Chris Marshall, 24, is helping plan The Studio’s music.

“A lot of Christian music is very safe, very bland, very simplistic. It’s a repeat of the same four chords, it doesn’t take risk,” he said. “A lot of songs are about how great and good God is, which is good, there’s a place for that, but there are also times in the Psalms where there’s a lot of questioning, a lot of doubt …”

Richard King, 28, has also been helping plan the services. He said he got involved with the Studio because it’s a place people can go and ask questions about theology. He has an evangelical background and said he felt ostracized in the past for being inquisitive.

“It (the Studio) is a place where we can talk about why we believe or why we don’t believe,” he said. “There’s no judgment involved there.”

Shedlock said in the mainline tradition it’s common to emphasize expertise, but she wants to move away from that with this new congregation.

“I really feel there’s no way I can be an expert in what God is doing in someone else’s life. So my job is to help someone see where God is and see how God is moving in their life and help them explore,” she said.

For the Ash Wednesday service, since this year it falls on Valentine’s Day, Shedlock plans on having the service focus on the thought of getting a valentine from God that reads, “Remember you are dust and to dust you shall return.”

That would be a peculiar valentine, Shedlock admits. But that’s the point. And it’s another of her poems.

there is dirt on me

in this urn of skin

bad to be dirty

but good to be dirt

Let me rephrase then,

Remember you are holy ground.…”

FāVS wants to tell more stories like this. With your tax-deductible donation, we can.
[give_form id=”53376″ show_title=”true” display_style=”button”]

Previous Gonzaga Lecture: Is this Global Warming?
Next Ask An Eastern Orthodox Christian: Having Mormon Friends