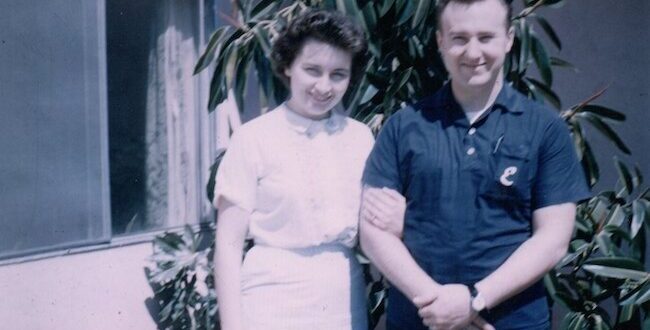 Chris Eddy spent the last three years of her life fine-tuning the story she had kept secret most of her days.

She had been married to, and raised a family with, a white supremacist.

The man she fell in love with when she was 18, Bob Eddy, was a dutiful Marine with broad shoulders and an alluring smile.

In time, though, his views as an Aryan supremacist became clear, as he served as an aide-de-camp to Richard Butler, the founder of the Aryan Nations in North Idaho in the 1980s.

Chris Eddy told no one.

Until it came out decades later in a community college a writing class.

“It took Chris four years in my Spokane Falls Community College extension course to be willing to finally dig down and tell her big story,” said local author Sarah Conover.

With the encouragement of Conover and other women in the writing group, Chris Eddy wrote, with detail, her brave and heartrending love story.

In “Torn: Married to a White Supremacist,” Chris Eddy writes about how her husband moved their family from California to North Idaho and eventually became the spokesperson for Butler’s neo-Nazi church. She writes about how her Catholic faith kept her loyal to her husband, and how she was able to separate the man she loved from his beliefs, which she despised.

The book was published this month, four years after Chris Eddy died at the age of 77from complications of intestinal surgery.

Her daughter, Marie Eddy, is planning a series of readings throughout the area to promote the book, starting with a book launch at 4 p.m. July 15 at the Bonner County Human Rights Task Force 30th anniversary celebration, 513 Oak St. in Sandpoint, Idaho.

She’ll also be speaking at the Moscow Human Rights Commission at Moscow City Hall on Sept. 22 in Moscow, Idaho.

“My mom always said the reason she was telling this story is that maybe it would help somebody else,” Marie Eddy said.

In an interview with the Southern Poverty Law Center in 2018 (two months before she died) Chris Eddy said she hoped to help others understand the psychological aspects of a person involved in extremism.

Her husband, she writes in the book, was a Marine, then a police officer, then an Air Guard. In time, he added the Aryan Nation uniform to his closet. The uniform, Chris Eddy explains, had a mental impact on him. It meant community, belonging and control.

“Her message is looking behind the obvious,” she said. “We can be pro-peace and anti-war and pro-humanity and we can march in that camp, while also pointing a finger condemning all those (white nationalist) men with guns. For each young man with a big gun, is a family, is a mother, sister, wife. There’s more than meets the eye.”

In “Torn” Chris Eddy shares how she refused to get involved with her husband’s church — Christian Identity church — and pushed back against his views, but resorted to overeating and valium to cope with the growing distance between them.

“On those nights when Bob ate early, then held audience with other committed racists in our front room, I ate dinner at the kitchen sink and stuffed food down the same throat where a scream waited close to the surface,” Chris Eddy wrote about her food addiction.

She stayed, in part because of financial necessity, but also because of the deep love she had for her husband, and the glimmers she saw now and again of the Bob Eddy she once knew.

In the SPLC interview, Chris Eddy said she never regretted staying with her husband, but did learn an important lesson along the way, and hoped it would resonate with anyone reading her book.

“You can’t change your spouse or partner’s religious beliefs wrapped around hate.  I thought I could change Bob…I do believe that hate is a stronger emotion at times than love,” she said. “For a spouse combating hate with love, they may need a spiritual or psychological assist from the outside.”

Marie Eddy said she sees it now, but growing up couldn’t understand why her mother stayed.

“I thought she was so weak, she wouldn’t leave. Now I realize there’s a lot more strength in what she did than packing us in a car and moving away,” Marie Eddy said. “She was fighting for him, for their marriage.”

Carol Ellis is a retired teacher who was in the writing group with Chris Eddy and helped the book get published. She said Chris Eddy’s steadfast love for her husband had more of an impact than she realized.

“If I could give Chris a hug today I’d say ‘You affected him…underneath he did hear you.’ When he died it was not by the gun, it was by the heart,” Ellis said.

Bob Eddy, though immersed in the Aryan Nations, spoke out against the group’s violence and eventually tried to distance himself, though he remained in contact with many members and never disavowed his beliefs.

Ellis said throughout “Torn” a reader can see the inner conflict Bob Eddy had.

He died at the age of 52 from a massive heart attack while driving in the car with Chris Eddy and their youngest daughter.

After his funeral, which Richard Butler and other Aryan Nation leaders attended, Chris Eddy moved from Sandpoint, Idaho, and eventually became a librarian. She never remarried.

Marie Eddy said it’s frightening to tell her mother’s story around North Idaho, but said it needs to be done.

Previous Freewill: A Hindu Perspective
Next Ask An Atheist: Reincarnation and Rebirth