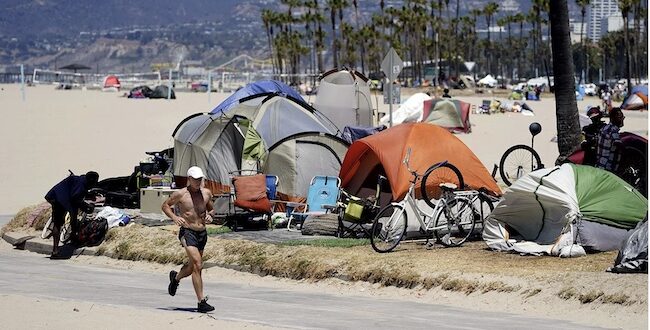 A jogger runs past a homeless encampment in the Venice Beach section of Los Angeles on June 8, 2021. (AP Photo/Marcio Jose Sanchez, File)

When he first began working at The Center, a Los Angeles-based nonprofit that hopes to  “break the cycle of homelessness through radical hospitality,” author and advocate Kevin Nye thought he had all the answers.

His job was to befriend the people he met, not save them; to see them as people, not problems to be solved.

In his new book,  ”Grace Can Lead Us Home: A Christian Call to End Homelessness” (out Tuesday, Aug. 9, from Herald Press), the Fuller Seminary graduate says that many of his fellow Christians make the same mistake. Too often, they offer cash or bagged lunches instead of relationships. Or they avert their eyes and just move on.

Nye suggests trying to see people experiencing homelessness as if they were Jesus.

“If we actually saw Jesus on the side of the road, and recognized him as the Son of God, our savior, we probably wouldn’t just roll down our window and hand him a five,” Nye told Religion News Service in a recent phone interview. “We’d hopefully pull over and talk and enter into some sort of relationship where we are doing a lot more listening than talking.”

Nye suggests that this approach can help his fellow Christians and others avoid transactional, paternalistic models that dehumanize the very people being served.

“When we encounter Christ in the face of the poor, we shouldn’t so much seek to transform them, but to be transformed ourselves,” Nye advises in the book’s opening chapter, using insights from years of firsthand experience as a homeless services worker in Los Angeles as well as from his theological training.

RNS spoke to Nye about his book and ways to better respond to the issue of homelessness.

This conversation has been edited for length and clarity.

You acknowledge that in your early days in homeless services, you were caught up in a savior mentality. How did that change?

I entered the field with the idea that I had all these resources — time, energy and gumption — to give to this work and this population. I wanted to make a difference and be a hero.

But my earliest responsibility with my job (at The Center in Los Angeles) was to walk around with a clipboard and get the name of everybody who came in, if they were willing to give it. It’s a very humbling task. My goal was just to get to know everybody. I quickly learned I needed to be in relationship. Authentic community can’t be top-down or transactional.

In the book, you take issue with the term “service-resistant.” Why is that?

If a person says no to a service we offer, we should ask what we’ve done wrong in program design rather than asking what’s wrong with them. I like to look at barriers. What might be keeping that person from accepting help? It might be that the program doesn’t meet their needs. It might be they just need more time, or you need to build trust and rapport. You can’t just walk up to somebody who you’ve never seen before and expect them to trust you with their health and safety.

You write that faith-based organizations can be some of the strongest proponents of what’s known as the “merit-based model” for ending homelessness. What are your concerns about that approach?

In the merit-based model, people have to earn their way through a process that ends in independent housing. Often people need to be clean and sober to enter a shelter, then in the shelter, they follow the rules and can graduate to shared housing. If they keep staying clean and sober, and keep attending the treatment plan laid out for them, they can graduate to maybe interim housing. Long-term, if they stay the course, they can finally receive housing.

One thing to note is that it just doesn’t work, statistically speaking. People are more likely to end their homelessness on their own, without any help, than to end their homelessness with programs like that. Ultimately, that model has so many barriers and provides so many opportunities for people to fail. The moment they do, programs like that put blame on that person for falling out of the program rather than asking, is this program flawed?

Why do you believe housing first models (which offer housing before other services) work better and are more biblical?

Housing first is proven to work far more effectively, and it’s common sense. If you provide someone with a baseline of safety, security and a place where they can sleep well every night behind a locked door, receive mail and have neighbors, then they are far more capable of building their lives back, whether that’s finding work or getting treatment for mental health, substance use or for a physical disability.

Housing becomes the springboard for people to flourish.

On top of that, it’s the way God treats people.  God is the one who takes broken people and offers life, offers abundance.

It comes back to this pernicious myth that experiencing homelessness and poverty comes as a result of spiritual and moral failure. It’s sort of what I call the runoff of the prosperity gospel — if you are faithful,  God will bless you with riches. The side (of the prosperity gospel) we don’t talk about is the idea that if you aren’t blessed with material wealth, it must be a sign of God cursing or abandoning you.

What are some of the most effective ways you’ve seen churches and other houses of worship address homelessness?

Churches can be involved in creating and sustaining affordable housing by donating land or supporting initiatives and candidates in building more affordable housing. For those already doing programs addressing homelessness, I really encourage moving from transactional to a relational model. Rather than having volunteers all in a kitchen or behind a serving table, have them move out, sit and eat with the people there. Instead of offering a to-go meal, allow people to rest for a few hours.

Something that we’re seeing throughout the country right now is a move toward criminalizing unhoused people’s existence. There are fewer and fewer places where they are allowed to sit down in public without being asked to move along. I think churches have a lot of space that they can open to offer rest for the weary.

You host Narcan training for Christians. What is Narcan, and how does your faith inform your belief in the importance of being equipped to use it?

Narcan is an overdose reversal drug for opioids. If somebody is experiencing an overdose from opioids, whether that’s heroin, fentanyl or a prescription opioid like OxyContin, it bumps the opioids off the receptors, and essentially revives a person. It’s such a shock that first responders often refer to it as a resurrection.

If you are between ages 25-64, drug overdose is the number one cause of death in this country. And because of our belief that people who use drugs are bad people rather than people who are suffering or need treatment, we have been really slow to respond. For me, this is a faith issue. It comes back to the idea of grace. Using Narcan and teaching people how to use Narcan to give people endless chances at life seems like the most in line with the Christian doctrine of grace of anything I could possibly imagine.

Toward the end of your book, you describe an event in which you served avocado toast for women at The Center. Can you talk about the theological significance of offering something as seemingly “extra” as avocado toast?

There was this discourse on social media about how, if millennials want to buy houses, they should stop buying gourmet coffee and avocado toast. It triggers this inherent belief that there are certain things that only people with wealth should get to have, and everyone else should be happy with whatever meager things they are offered until they’ve ascended economically. Again, it comes back to this idea of the prosperity gospel.

To counter this narrative, I decided to make and serve avocado toast to the exact people others believed shouldn’t have it or didn’t deserve it. So often when we provide resources for people who are poor or experiencing homelessness, we believe beggars can’t be choosers. That they should be happy with whatever we offer them, even if it’s something we wouldn’t want to eat. But God provides in abundance. We have all we need if we could learn to steward it properly. The gospel says we’re all children of God and we all deserve not only for our needs to be met, but to live in ways that contribute to joy and flourishing.

religionnews.com
Previous 5 Family-Friendly Activities To Do With Kids This Halloween
Next The Long Goodbye