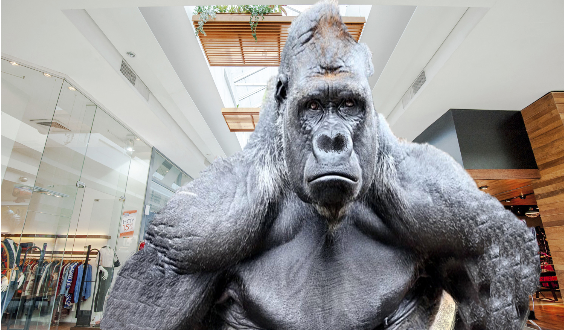 The brain reacts automatically to information, which you process with your prefrontal cortex and a whole bunch of other super cool structures. Your nervous system reacts appropriately to what “you” think or imagine being true. The human brain and nervous system are engineered to react automatically and appropriately to the problems and challenges in our daily environment.

For example, a person does not need to stop and think that survival requires them to run if they meet an angry gorilla while shopping at the mall. While shopping you don’t have to keep repeating to yourself “angry gorilla’s are dangerous, angry gorillas are dangerous,” in order to remind yourself to become afraid and run like a maniac if you bump into an angry gorilla. The fear response is both automatic and appropriate. First, it makes you want to flee. The fear then triggers two tiny organs seated neatly atop your kidneys pumping adrenaline into your bloodstream. You don’t choose to do this. Your adrenal glands do it, and that’s not all; your brain then diverts blood from activities it deems nonessential, like writing poetry, to high-priority tasks such as hitting and running. The large muscles of the arms and legs get more blood, the higher-level reasoning sections of your brain get less and your breathing is much faster so that the oxygen supply to your muscles can greatly increase.

Many people mistakenly think that our running like the wind reaction to bumping into an angry gorilla is due to our emotions, such as fear. Yet, it was an idea—information received from the outside world and evaluated by the prefrontal cortex and other structures, which sparked the emotional and physical reactions. It was basically an idea or belief, which caused your emotion of scared you out of your wits. In short, when you were in the mall you reacted to what you thought, believed or imagined the environment to be.

The messages brought to us from our environment consist of nerve impulses from the various sense organs. Researchers have a relatively clear picture of the physical foundations of this form of consciousness.  Information streaming in from nerve receptors in the skin, muscles, tendons, joints, eyes, ears and mouth passes first through the thalamus and/or the reticular formation – a group of nuclei in the brainstem. Before even reaching the cortex, impulses have passed through a series of processing regions that behave somewhat like secretaries who screen phone calls and visitors before passing them on to the boss.

There is also direct evidence that the Reticular Activating System is able to selectively choose which muscles and glands receive control responses much like a response-selecting mechanism. It seems to be able to sensitize or ‘awaken’ selected nervous circuits and desensitize others. This is sometimes accomplished by selective muscular activation: electric signals sent over reticular nerve fibers down the spinal cord to terminate on the relay nerve cells whose axons pass out to the muscles to achieve a sort of ‘volume-control’ action that increases or decreases the magnitude of the muscular response.

So, in short, the reticular formation monitors incoming stimuli and chooses those that should be passed on to the brain and those that are irrelevant and may be ignored. In addition to being a filter, the reticular formation also controls respiration, cardiovascular function, digestion, awareness levels, and patterns of sleep. Kind of an important part of the nervous system wouldn’t you say?

But What About The Angry Gorilla!

In our central and peripheral nervous system nerve impulses are decoded, interpreted and evaluated in the brain and made known to us in the form of ideas or mental images. In the final analysis it is these mental images that we react to. You act and feel, not according to what things are really like, but according to the image your mind holds of what they are like. You have certain mental images of yourself, your world, and the people around you, and you behave as though these images were the truth, the reality, rather than the things they represent.

Let us suppose, for example, that you’re back in the mall, but you didn’t actually meet a real angry gorilla, but a movie actor dressed in a realistic angry gorilla costume. If you perceived and imagined the actor to be a real angry gorilla, your emotional and nervous reactions would have been exactly the same. Or let us suppose you met a large shaggy dog, which your “angry gorillas are dangerous” imagination mistook for a gorilla. Again, you would react automatically to what you believed to be true concerning yourself and your environment.

It follows that if our ideas and mental images concerning our selves or the world are distorted or unrealistic, then our reaction to our environment will likewise be inappropriate. The big news is: Mental pictures offer us an opportunity to “practice” new traits and attitudes, which otherwise we could not do. This is possible because again—your nervous system cannot tell the difference between an actual experience and one that is vividly imagined. If we picture ourselves performing in a certain manner, it is nearly the same as the actual performance. Mental practice helps to make perfect (I mean better).