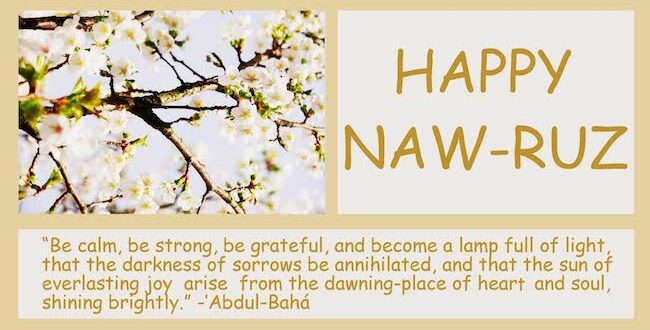 Naw-Ruz: A Very Happy New Year To You All!

Naw-Ruz: A Very Happy New Year To You All!

The Baha’i Faith, born in 19th century Persia, retains many traditions from that culture. Naw-Ruz is a modification of the Zoroastrian Nowruz, literally “new day,” marking the end of winter and the arrival of spring. It has been observed in Persian culture for more than 3,000 years.  In 2010, UNESCO included Nowruz on its “List of the Intangible Cultural Heritage of Humanity.” An estimated 300 million people throughout much of Asia celebrate Nowruz today.

In 1844, a young merchant of Shiraz, Persia, proclaimed that he was a messenger of God, “bearer of a message destined to transform the life of humanity,” and to prepare the way for one greater than himself. He took the name “The Bab,” meaning “The Gate” in Arabic. His message attracted many followers, so many that the government executed him in 1850. Among his legacies is the Badi Calendar.

Because Baha’u’llah ratified and adopted The Bab’s calendar, Baha’is throughout the world follow that calendar, also known as the Baha’i Calendar. Naw-Ruz is the first day of the Baha’i year, which contains 19 months of 19 days each, leaving an extra four days most years to reach the solar calendar’s 365 days.

Those four days (five in leap year) are called Intercalary Days, “inserted in a calendar.” These days of celebration and gift giving are inserted between the last two months of the Badi calendar. The month following the Intercalary Days is one of preparation for the upcoming new year. Baha’is observe a 19-day Fast in spiritual preparation for the annual Naw-Ruz renewal.

This last month is named ‘Ala’, meaning Loftiness. During ‘Ala’ Baha’is between ages 15 (the age of maturity for Baha’is) and 70 are obligated to refrain from food or drink between sunrise and sunset, unless physically unable to do so for health reasons. This Fast is essentially, “a period of meditation and prayer, of spiritual recuperation, during which the believer must strive to make the necessary readjustments in his inner life, and to refresh and reinvigorate the spiritual forces latent in his soul. Its significance and purpose are, therefore, fundamentally spiritual in character. Fasting is symbolic, and a reminder of abstinence from selfish and carnal desires.”

The renewal of another year—what’s next?

As the fast draws to a close on the eve of Naw-Ruz, Baha’is the world over celebrate the new year with prayer, food and fellowship. Small communities gather in each other’s homes. Larger communities sometimes choose restaurants or enjoy potluck gatherings in public meeting halls to share their hopes for the upcoming new year with family, friends, and neighbors.

Food, warm friendships, and merrymaking span generations, often accompanied by prayers, music, arts and crafts, storytelling, singing, and other uplifting experiences to reinforce hopes for the upcoming year. A wide variety of cultural practices brought into the Baha’i Faith by cultures around the world enrich the Naw-Ruz experience with an endless variety of possibilities, as this new day is observed annually across the planet. What began millennia ago as Nowruz in a relatively small region of Asia is celebrated today on all continents and among unnumbered cultures in myriad localities across the face of the earth as Naw-Ruz.

What might we look forward to in year 179 of the Baha’i Era? Global pandemics, political upheavals, and actual war have brought us to this Naw-Ruz.  Where will we choose to go from here?

Previous Christian Author, Diana Butler Bass, to Speak at Pullman Symposium
Next What children can teach us about blind faith and the power of ‘Why’?