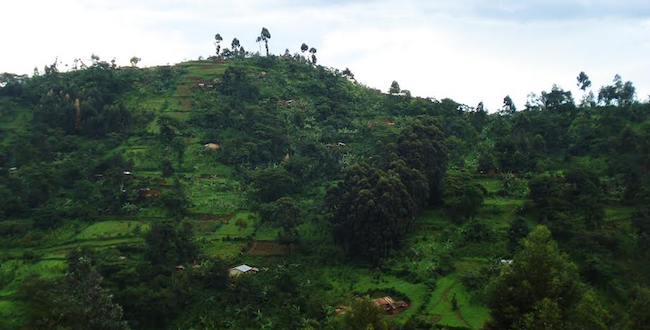 Natural Disasters: We have to do our part

In my limited travel of the world, nothing has yet, for me, outdone the beauty of the mountains in eastern Uganda. Heavy rainy seasons turn the entire landscape into deep, lush shades of green, and the variety of vegetation adds to the picturesque scene. The economy of rural Uganda is heavily agricultural so it seems that every plot of land available is used for planting corn, rice, matooke, tomatoes, cassava, etc. The mountains in eastern Uganda look like a patchwork quilt with the crops that are planted all over the steep hillsides, and it’s beautiful. However, with heavy rainfall it’s also a recipe for disaster, and the area has become prone to large mudslides, burying homes and destroying crops.

A mudslide is just one example of something that might destroy an agricultural crop, consequently devastating a person’s livelihood. Bugs, too much rain, too little rain, or a field being trampled or eaten by livestock can all have a severely negative impact on a Ugandan farmer. When the only source of income for you and your family can so quickly and unexpectedly be swept away by nature, what do you do about that?

Throughout the year, Uganda cycles through periods of dry seasons and rainy seasons. While working in Uganda, I often heard from people that the rainy season was a time of prosperity because people were able to sell all the produce from their farms and gardens, but alternatively, then the dry season would become a time of scarcity and hardship. I was surprised by this contrast and surprised by the fact that this gap was being created by a lack of preparation for the dry season. I saw over and over again that if people had money, they wanted to spend it! Which is understandable. If you don’t typically have a lot of money, and then there’s a month when you have surplus, it definitely feels good to spend that money on things you couldn’t typically afford!

One of the projects that I became enthusiastically involved in while working in Uganda was the formation of village savings and loans associations, in response to this apparent need to develop a culture of savings among individuals and families. These groups provide individuals with a place to save their money, and membership in the group requires that they save a minimum amount each week. Members can apply for loans throughout the year, or they can just use the group as a place to save their money. At the end of each annual cycle, each member is paid out for their personal savings, and the interest accrued on loans is divided among all group members. Each individual has the option to take their savings and go, or they can enroll in another cycle.

I recently wrote about a trip to Uganda in the spring of 2016 where I was able to see the fruits and success of some of these groups. It’s amazing to witness how a person’s life can be changed by taking active steps to plan and prepare for the future. Having a bank of savings allows people to live proactively rather than reactively, both in everyday life and in times of disaster, emergency, or unexpected circumstances.

While working with these groups, as well as a number of other community development projects in Uganda, I often witnessed concrete goals, action plans, and hard work being traded for declarations of faith and hope that God would provide. And although I would never downplay the role of faith, prayer, and God’s mercy in our lives, I do think that God expects us to do our part. I think that he expects us to be smart, hardworking, and diligent and to practice preparedness and self-reliance. These principles and behaviors contribute to our own provident living, but more importantly, if we are prepared, then we are in a better position to come to the aid of others whose needs may be more dire than our own. I think resiliency in times of disaster and hardship is often fueled by people who are willing to lend a helping hand, give of what they have, and offer comfort, support, and selfless service. “We are the Lord’s hands here upon the earth, with the mandate to serve and to lift his children. He is dependent upon each of us” (Thomas S. Monson, President of the LDS Church). Let us make it a goal to do all that we can to be sufficiently prepared to fulfill this important role whenever circumstances may arise.

“Faith, Resiliency and Natural Disasters” is the topic of the Oct. 1 SpokaneFāVS Coffee Talk, which will take place at 10 a.m. in the Community Building, 35 W. Main Ave. All are invited to participate in this community discussion. Briggs is a panelist.