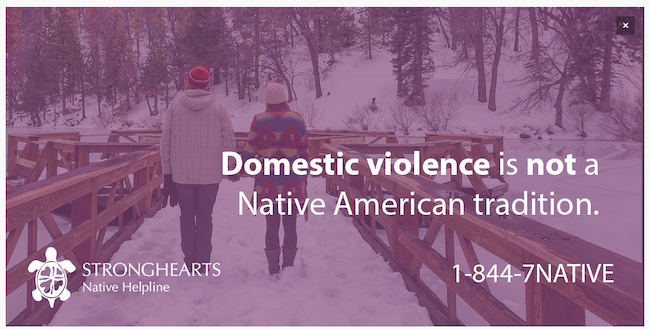 With Native American women becoming more vulnerable to sexual assault and domestic violence, especially with the number of Missing and Murdered Indigenous Women (MMIW) cases reaching over 5,700 as of 2016, helplines such as StrongHearts Native Helpline are becoming more vital to combating these issues and helping women get the assistance they need.

Mallory Adamski, director of communications and advancement at the National Indigenous Women’s Resource Center (NIWRC) and a member of the Dine (Navajo) tribe, said that StrongHearts was created in March 2017 by NIWRC and the National Domestic Violence Hotline to provide a culturally appropriate helpline to help tribal communities. She added that it was created to “dive into the specifics of the lack of resources in tribal communities, the cross-jurisdiction issues, the issues of tribal sovereignty and intersections with the local federal law and Indian law.”

Within its first year the helpline, based in Eagan, Minnesota, expanded nationwide and has received over 6,000 calls across the country. Seventy five percent of those calls came in during operational hours.

“StrongHearts Native Helpline is a safe, confidential and anonymous domestic violence and dating violence helpline for Native Americans,” Adamski said. “So our advocates get calls from victims, from survivors, from concerned friends or family, people who might identify as abusive themselves and any service providers that might need additional assistance or support.”

When people call the helpline, she said that it first assesses safety to make sure that the caller is in a safe place to talk and get help. From there, the callers are connected with advocates, who are all Native American and help them identify their needs, find ways to stay safe and connect them with culturally appropriate resources if they are interested.

These resources include shelters, rape crisis centers, behavioral health departments, emergency medical facilities, domestic violence programs, legal services and any additional services that are created by Native American tribes or Native-specific ones to help these communities.  Adamski added that callers are always welcome to call them back.

Lori Jump, assistant director of the helpline, added that when it isn’t possible to find tribally-based services to meet the needs of their callers, they are referred to mainstream programs.

For callers experiencing an MMIW situation, Jump said that their response would primarily be one of support, validation and empowerment. Depending on the situation – with each one being unique – they would help the caller to process what they are experiencing, talk through their options and help them find resources in their area that are first responders.

Helplines like this are so important for the tribes to have because, Adamski said, Americans Indians and Alaska Natives face unique barriers to safety and justice when it comes to domestic violence and dating violence, since more than four-in-five Native American men and women have experienced violence in their lifetime.

“That is unacceptable, but for some reason it’s been normalized and accepted in our communities and we really believe that that’s a direct result of colonialism,” she said. “The invisibility of Native people, the attacks on tribal sovereignty, the inability of tribes to prosecute crimes on their tribal lands, it’s something we don’t take seriously enough as a society and I think it’s time for that to change.”

Adamski added that there isn’t enough resources to go around for the tribes and that the helpline is part of the effort to change that by being a free and confidential helpline for Native people created by Native people.

Help support more local journalism like this by becoming a FāVS member!