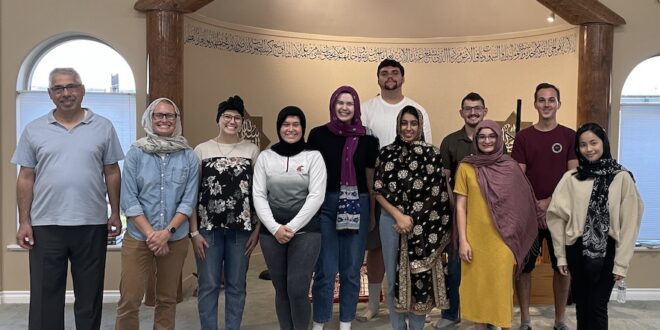 When I entered the masjid, I could smell the fragrant aroma that reminded me of the gurdwara, and I wondered how similar, yet uniquely different, the two places of worship were.

This semester, I am participating in Murrow College’s Religion Reporting Project led by my professor, Tracy Simmons, and our first field trip took place on Sept. 6 at the Spokane Islamic Center.

When we parked at the masjid and got out of the car, my group and I immediately put on our head coverings. I brought my chunni, a long, black head scarf adorned with jeweled details that I wore for a wedding last month. My chunni was different from a hijab because it was longer and slipped easily from my head.

We entered the masjid and met Mamdouh Elaarag, a board member for the Spokane Islamic Center, and immediately took our shoes off. This part was natural for me, since whenever we go to the gurdwara, the first thing we do is take off our shoes and put them on a shelf.

Just outside the praying rooms, we introduced ourselves individually, and Elaarag spoke about the Spokane Islamic Center and its beginnings. Then we moved on into the men’s prayer room, a large room with green and white striped carpeting.

When I learned that men and women pray in separate rooms, it surprised me. Elaarag said it would be a distraction for the men to pray in the same room as the women.

I grew up Sikh and stated this in my previous article, but in the gurdwara men and women were separated in the prayer room and had to sit on opposite sides. I disliked this and thought it was very backwards. So, it is interesting to learn that women and men are even more separated in masjids.

Elaarag spoke about the religion and how it came to be. He said Islam started with the Prophet Adam. There were several after him, the last being the Prophet Muhammad who I have heard of.

Elaarag said the prophets are those who spread the word of God, or Allah, on earth, and Muslims look up to them. This reminded me of how in Sikhism, we have gurus who were divine messengers of God.

He spoke about how Muslims pray five times every day because that is what Allah told them to do. They pray toward the direction of Mecca, Islam’s holiest city.

Once he finished describing the brief history of Islam, we had the opportunity to ask Elaarag questions. My first question was why do women have to cover their heads and not men?

Elaarag said it was because that was one of the rules the Prophet Muhammad had said that Allah ordered. He added it is because women’s hair is seen as sensual and can be a distraction.

My next question was if in modern times, were there any rules that Muslims have been following less and less. When I came up with this question, I thought about how in my family’s religion, we cut our hair even though we are not supposed to.

Elaarag said in America, it can be harder to pray in a masjid because there may not be one close by. In the Middle East, Muslims are able to pray five times a day because they hear the call to prayer wherever they are.

He said praying is a way of being together as a community, and you are supposed to pray exclusively at the masjid. However, some Muslims just pray at home.

Another question Elaarag answered was about the services conducted and how the masjid runs. He said that services are conducted by an imam, which is the person who leads the prayers. He said it was hard to get an imam at first, but then they found one who can conduct the services in English and Arabic.

Then Elaarag spoke about challenges he has witnessed being Muslim in America. He said there has not been any issues, and when 9/11 happened, people were not hateful towards him.

He detailed a time when people he knew came up to him after the terrorist attack and said, “We know that’s not you.” I also curious about the challenges Muslims faced after Sept. 11 because growing up, I learned that they were often judged in society after the attacks.

We learned about Ramadan, which is the holy month for Muslims where they fast until they break it during Eid. Eid marks the end of Ramadan and is when Muslims break their fast. I learned there was a second Eid every year when an animal is sacrificed.

“Ramadan is my spiritual cleansing,” Elaarag said. “I feel closer to God when I’m fasting.”

A student asked him how difficult it is to convert into Islam, and the answer was simple. A person just has to testify that they believe in the Prophet. Elaarag added that there are many Muslims who are of a different race and skin tone.

Elaarag spoke on whether or not Muslims can marry outside of their religion, and he said that men can. However, women cannot unless the man converts. I believe in the Sikh faith, marrying outside of your faith is possible, but you cannot get married in a gurdwara. In my family, we have to marry in our faith, and if we do not, disownment is a guarantee.

Elaarag answered more questions and then showed us the women’s prayer room, which was essentially the same as the men’s. He told us that usually women have their own entrance, which is separated from the men so that they do not cross paths. However, women are still allowed to enter through the men’s entrance if they wish to.

Previous You must watch Ken Burns’ PBS series on America and the Holocaust
Next Do Non-Denominational Churches Baptize?