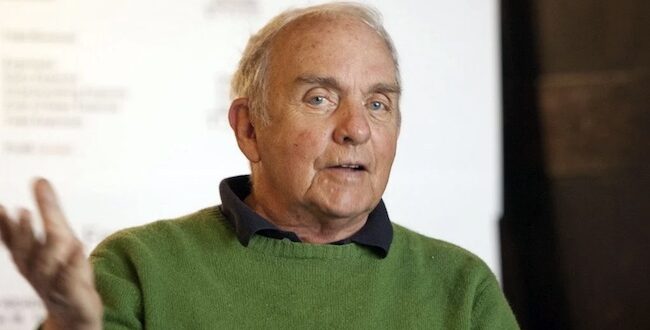 My Favorite Christian Author has Died

My Favorite Christian Author has Died

“You have a favorite Christian author? Really?”

Sure. If my Christian colleagues can admire the likes of Martin Buber, Abraham Joshua Heschel, David Hartman, and Eugene Borowitz — which they do — then I can have my own list of favorite Christian authors. Each one has taught me, and inspired me, and moved me.

That is just a short list. As the Sages put it: “Who is wise? The one who learns from all people.”

But, no one moved me more than Frederick Buechner, who died this week at the almost biblical age of 96. He was an ordained evangelist in the Presbyterian Church (USA). Buechner had a prolific career as a preacher, writer, and a spreader of often pithy theological sound bytes — each one of which could open the gates of heaven, even for this Jew and rabbi.

Years ago, Buechner made a quip that I have quoted more than almost any other short statement about Scripture. I love it, and I have loved it ever since I first read it in Buechner’s book, Wishful Thinking.

He defined the vocation of the prophet.

“There is no evidence to suggest that anyone ever asked a prophet home for supper more than once.”

So, let’s talk about the prophets.

I grew up in, and serve a synagogue that is affiliated with the Reform movement. We liked, and still like, to call ourselves “prophetic Judaism.” We have resonated with the prophetic willingness to criticize kings, priests — and yes, ordinary people. So, too, we have believed that ritual needs to be accompanied by ethical behavior, and by inward devotion.

This is Buechner’s re-reading of Amos:

Amos went on to say, “Your great cathedrals bore me just as stiff as your TV evangelists, and your prayer breakfasts at the White House cause me no less abdominal discomfort than your dashboard Virgins. Justice is what I want, not photo opportunities, and righteousness like an ever-flowing stream…

I think of many of my colleagues of an older generation, who lost their rabbinical positions because of their religious positions — on social justice, ethical issues, and on issues of Jewish practice and identity. “Tell the truth, and see the world,” an older colleague once told/warned me. In some cases, they jeopardized their own physical safety in their fight for justice.

But, people don’t always want to feel uneasy — or, frankly, even challenged.

In Working the Angles, Eugene H. Peterson, another one of my Christian teachers, put it this way:

Most of the people we deal with are dominated by a sense of self, not a sense of God. Insofar as we deal with their primary concerns — the counseling, instructing, encouraging — they give us good marks in our jobs as pastors. Whether we deal with God or not, they don’t much care. Flannery O’ Connor describes one pastor in such circumstances as being one part minister and three parts masseur.

The prophets were not masseurs. They did not make people feel good.

The prophets were drunk on God, and in the presence of their terrible tipsiness, no one was ever comfortable. With a total lack of tact, they roared out against phoniness and corruption wherever they found them.

Or, to restate that old saw: The role of religion is to comfort the afflicted, and to afflict the comfortable.

Speaking personally, I have tried to do both.

The late Rev. William Sloane Coffin once reportedly said: “The pastors that lost their jobs over [their criticism of the war in] Vietnam weren’t visiting the sick enough.”

Coffin was saying that if you are going to be prophetic, i.e., fighting for social justice, then you have to be even more pastoral.

More than this: Prophetic tactlessness is a non-starter, especially if you want to be invited back again for supper, which means if you want to be loved, which is the often unconscious reason why many people enter the ministry.

The challenge is: tell your truth with tact, with love — and, above all else, with a sense of humor and the humility that prompts you to say, “I could be wrong, but…”

Finally, let’s admit something about the biblical prophets.

This was not a fun job.

First, no prophet ever really wanted to be a prophet. It wasn’t like they responded to a posting in needprophets.com. The only thing that they were responding to was a call from God — and at least some of them, like Moses and Isaiah, were totally not interested in the gig.

Second, and this is key — almost no prophet was successful in his (or her — the prophetess Hulda, for one) task. Not a single prophet was heeded — except for one.

That would be the prophet Jonah, who actually fled geographically from God’s call; and who ultimately went to Nineveh, proclaimed the need for redemption — and they listened to him!

Perhaps that is why we read the book of Jonah at the very end of Yom Kippur — to show how it’s done.

I loved Frederick Buechner’s writings for their wit, and for their insistence on the role of God in our lives. You might, as well. Check out his books.

Right about now, Buechner is making God laugh — and cry.