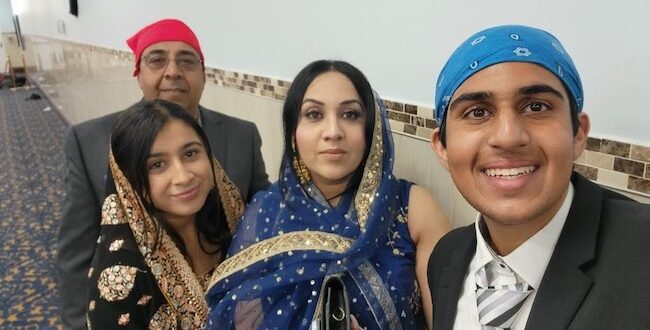 I am currently a senior at Washington State University and will be participating in the Religion Reporting Project led by my professor Tracy Simmons. We will go to three different places of worship and learn about those faiths. While I am personally not religious, I used to be.

I grew up in a Punjabi household while living in one of the whitest towns in California. I was raised knowing and believing in Sikhism. I spent Sundays going to the gurdwara, a place of worship for Sikhs, and learning about the history from my uncles and dad.

I learned of the 10 gurus, and I used to memorize their names in order with my uncle. I learned of the five k’s which were objects that every Sikh must wear. These were kesh (uncut hair), kara (steel bracelet), kanga (wooden comb), kachera (cotton underwear) and kirpan (sword).

Some of these rules are not followed by every Sikh in modern times. Some who are extremely dedicated do not cut their hair, and a majority of Sikhs wear karas. I used to have a kara, but ironically, my skin would get irritated, and I had to stop wearing mine.

When I went to the gurdwara with my family, we would enter the prayer room and bow our heads to the Sri Guru Grant Sahib, the central holy scripture, before sitting down on the carpeted floor. Our heads would be covered by cloth. Recently, I learned that it is so that women and men would be seen as equal.

Women and men would be separated in the prayer room. I always hated that because I preferred to sit with my dad, especially since my mom would not come with us sometimes.

My sisters and I would wait 20 or 30 minutes until my dad got up, and we would leave the prayer room and head to a cafeteria to eat. The cafeteria is called langar, a community kitchen in the gurdwara, which is free to everyone. You do not need to be Sikh to eat there.

Langar was my favorite time because sometimes the food was so good and they usually had dal and rice with some kheer (rice pudding).

My moments at the gurdwara were spiritual and educating, but it wasn’t until I was forced to attend Sunday school when my relationship with Sikhism went downhill.

My dad wanted my sisters and me to attend Sunday school so we could learn about Sikhism and our culture. I hated it. I felt judged by the man who led the school as I was not as traditional of a Sikh as the other students in the class.

I could not grasp any of the concepts, and I would always get scolded for not knowing how to write in Punjabi properly. One time, the man who led the school threatened to tell my dad that I was failing. In addition, my personal life wasn’t doing great and that disconnected me more from my religion. So I stopped going to the gurdawara and put an end to my beliefs in Sikhism.

I have not attended the gurdawara religiously as I used to. Sometimes I consider going back because it was not the religion that disconnected me, but the people who tried to uphold it. Someday I may go back to a gurdwara on my own, and I hope to take any children that I may have to one.

I am excited that I am part of the Religion Reporting Project because I want to hear about people speaking about their religions. I want to understand people’s faiths and beliefs, which is why I am happy that the first place we went to was the Islamic Center in Spokane.

Islam is a religion I have heard so much about because Muslims play a large role in the history of Sikhism. It is perhaps one of the most peaceful religions that I know of, and I plan to write about my experience visiting the masjid in my next column.

Puneet Bsanti is a senior at Washington State University, studying English and Multimedia Journalism. She will also be receiving an Editing and Publishing certificate. She writes for The Daily Evergreen, the school's newspaper and is president of English Club. Puneet loves to write about important stories revolving around multicultural communities and wants to continue doing that after she graduates. In her free time, she enjoys reading, traveling and binge-watching TV shows.