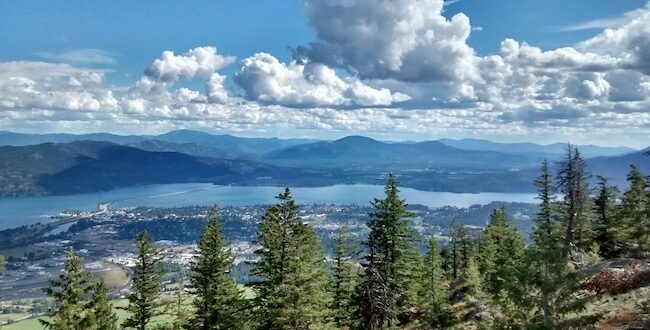 My Contingency Plan for Death

On a beautiful September weekend in 2017, I went to Mickinnick Trail in Sandpoint, Idaho. At the trailhead, there’s a sign with a map of the winding trail and a story about its history. It says that in 1997, the surrounding land was donated to the US Forest Service by Nicky Pleass, in memory of her late husband, Mick. The name “Mickinnick” is a hybrid of Nicky, Mick, and the “kinnickinnick” plant often found along the trail.

I offered a somber tribute to the man after which the trailed was named. Then I tightened my pack around my shoulders, spat onto the ground, and headed up the descent. I had 2,000 feet, 3.5 miles to go. The blue expanse of Lake Pend-Oreille flickered through and above the surrounding evergreens. I was gaining ground and going very fast. My legs were in pain, but I wanted pain. I kept going.

I slid my ear-buds into my ears and turned on the next episode of “This American Life” in my queue, “Godless America,” which featured a monologue by Catholic comedian Julia Sweeny about her deteriorating faith.

“I was raised Catholic, and for me, it was all-in-all a great experience… I had a few times… where I felt the power of the Holy Spirit, this force of love and transcendence, come over me and just shake me to the core.”

I squished my boot hard into the dirt with a grunt.

I haven’t told anyone this, out of fear that people — or God — would think I was a bad Christian. But I’d never felt this transcendence before. Sure, I’ve felt emotionally engaged during worship songs. I’d prayed, with a deep heart, for something I wanted. I’d even felt as though maybe God might be working behind the scenes. But can I say that I’d “felt the power of the Holy Spirit shake me to the core”? No, I cannot.

Julia later recounts her commitment to rereading the Bible from the beginning. Over time, she noticed some strange things: factual inconsistencies, stories of murder and rape, even confusion over the central Gospel message itself. Confusion I’d never felt brave enough to express before.

“And then one day I was Cometing out my bathtub, and I thought, what if it’s true? What if humans are here because of pure, random chance? What if there is no guiding hand, no one watching? I realized I had spent so much time thinking about what God meant that I hadn’t really spent any time thinking about what notGod meant… I realized that there was this teeny-weeny thought whispering inside my head… And it whispered: There is no God. And I tried to ignore it. But it got a teeny bit louder. There is no God.”

I begged her to stop going with the doubts, because they terrified me. But she didn’t stop. She went all the way there:

“… I don’t think anything happens to us after we die. My brother Mike. He just died. I always had this idea that Mike’s death, while premature, was his divine destiny somehow. And that his spirit didn’t really die, but it lived on. Not just in the memory of those that knew him, but in this real, tangible sense. And I realized that I now thought he died. He really died, and he was gone, forever.

“And then I realized I had to go back and basically kill off everyone I ever knew who died who I didn’t think really died.

I stood at the summit overlooking the lake, with evergreen-topped mountains surrounding the wide blue waters below. I let the echo of Julia’s words sink into me, reverberating with the sound of the wind swishing up the mountainside, cooling my sweat. This very well could be it—that when we died, it was over. No more experiences, no more thinking, no more feeling, no more memory, just darkness — no, not even darkness. It would be just a deep sleep. And we’d never wake up.

I kicked a rock over the precipice. “No,” I said.

That was logically flawed! If everyone — everything — ended up in oblivion, then how did it matter how we lived our lives? Would it not matter if I behaved like Mother Theresa or Charles Manson if the result — not just for me, but for everyone else — would be the same? It wouldn’t matter if you died at the age of 2, or a 102, you would end up the same way, with no memory of your life, no lasting impact of your decisions. This couldn’t be true. Could it?

Maybe I was approaching this all wrong, I wondered. Maybe this didn’t have to be either-or. Maybe it could be both-and. Truth is, it felt wrong thinking there was no God, no afterlife, no lasting experiences after our deaths. I wanted so badly to believe that my soul would be absorbed into a spirit world, filled with love and eternal peace and belonging, and all would be well, forever.

But I also had to be prepared in case that didn’t happen. In the event that I’d slip and fall to my freak death on this hike, I had to be prepared for the exceedingly likely outcome that nothing would happen. That I’d be oblivious, forever, as if I’d never been here.

I have no idea if God accepts contingency plans. I have no idea if I’m allowed to keep my feet in both beliefs at the same time. But like the tiptoeing I did on the descent down the mountain, I knew I would have to get by with balancing both possibilities. Until I had a near-death experience and could take a sneak peak behind the veil, I’d have to be content with holding this tension.

That evening, I reached out to Julia Sweeney in Twitter, thanking her for her vulnerability and for speaking to my own spiritual unraveling. I never heard back, but I was OK with that. It reminded me of all the times I’d prayed and never heard anything back from God. And while I’d been confused for so long as to why I never did, that night I felt just a little better about it.

Ben Faulkner has lived in Texas, Ontario, Michigan, Honduras, Tennessee, Washington State, and the District of Columbia. He studied Philosophy and Psychology at Calvin University and later taught both subjects at an international school in Tegucigalpa, Honduras. He formerly served as both an academic advisor and associate director of the honors program at the Community Colleges of Spokane. Now he’s a program manager at the George Washington University Honors Program in Washington DC. When he’s not writing a story or immersed in conversations, you can find him lost on a trail, in the pages of a book, or cozied at home with this partner.