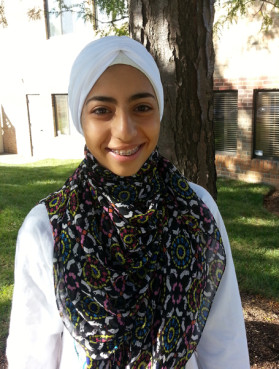 Muslims say they deserve school time off for holidays, too

Hannah Shraim, a 14-year old sophomore at Northwest High School in Germantown, Md., will miss school on Tuesday (Oct. 15) to celebrate the Islamic holiday of Eid al-Adha, or the Feast of Sacrifice. Photo courtesy Hannah Shraim

(RNS) Hannah Shraim, a 14-year old sophomore at Northwest High School in Germantown, Md., will miss school on Tuesday (Oct. 15) to celebrate the Islamic holiday of Eid al-Adha, or the Feast of Sacrifice.

Instead, she and her two older brothers and her parents will go to morning prayers with an estimated 5,000 others at the sprawling Maryland SoccerPlex in nearby Gaithersburg. After prayers, they’ll mingle with friends, pass out toys to kids, and then families will head home or out to eat to fuel up for a day full of visiting relatives, exchanging gifts, more prayers, and more eating.

But at some point during the day, Shraim will have to study for her PSAT, which is on Wednesday.

“I thought, ‘Come on, do they really have to schedule it the day after Eid?’” she said. “They would never schedule a test after Christmas.”

When she was in eighth grade, Shraim’s teacher scheduled a math test on Eid al-Adha, despite guidelines by the Montgomery County school board that teachers not schedule tests on religious holidays. She had to skip the holiday in order to take the test.

“I felt put down by our system,” said Shraim, whose brothers have also missed holidays because of school.

Experiences like Shraim’s have been driving efforts in recent years by Muslim Americans to get school officials to recognize Eid al-Adha and Eid al-Fitr — the other major Islamic holiday that happens two months before — as official holidays.

Several school districts with significant Muslim populations already observe one or both of the Eid holidays as official days off, including Paterson and Trenton in New Jersey; Dearborn, Mich.; Burlington Vt.; and Cambridge, Mass.

Similar efforts in New York City, Connecticut, and Baltimore County, Md., have stalled, while those in Maryland’s Montgomery County, just north of Washington, have recently restarted. There, schools are closed for Christmas, Good Friday and the Monday after Easter; since the 1970s, schools have closed for the Jewish holidays of Rosh Hashanah and Yom Kippur if those days fall on a weekday.

Muslims in Montgomery County have lobbied for school closures on Eid holidays for at least 10 years. The school district established guidelines a few years ago allowing Muslim students to take excused absences on Eid days, which are also considered non-testing days.

But the county’s board of education has resisted making Eid days official holidays, arguing that religion can’t be cited as a reason to close school. Rather, Eid supporters must show that the school day will be affected by a number of student and staff absences.

Muslims counter that the board’s demand is vague because it offers no numerical minimum, and unreasonable because it wasn’t made of other groups. By one count, there are at least 12,000 Muslims living in Montgomery County, and local Muslims say the eight mosques and anecdotal evidence suggest their numbers have indeed grown significantly in recent years.

“I hate to say that the source of the resistance is discrimination, but we can’t help but sometimes think that’s what it is,” said Zainab Chaudry, vice president of the Maryland chapter of the Council on American-Islamic Relations.

“It seems strange for the board to ask us to show proof that instruction would be impacted enough to close school when they didn’t ask the other communities to show proof.”

Chaudry helped create the Equality for Eid Coalition, which started an online petition that so far has close to 1,000 signatures; the group is calling on Muslim and non-Muslim families to keep their children home on Tuesday. The effort has also been supported by some Christian and Jewish groups, and at least one Montgomery County councilman, George Leventhal, who is Jewish, has said he will keep his children home for Eid.

For many Muslim families and students, it’s not just about equity and sparing students the hassle of make-up work, but connecting with their religious identity. Many Muslim parents worry that children are more likely to lose their sense of identity when they aren’t able to celebrate their holidays.

“We’re a minority. It’s important that our kids grow up with traditions. If we don’t celebrate the holidays, our kids won’t have any traditions to inherit and pass down to their kids,” said Hannah’s mother, May Salloum-Shraim, who works as a data analyst for the Montgomery County school system.

Salloum-Shraim is acutely aware of these differences because she is a convert, and her family still visits Christian relatives in Syracuse, N.Y., over Christmas. “I know they’re having fun. There’s the dinner, the decorations, the gifts. They really get to experience Christmas. I need to make sure I have the same thing going on for Eid,” she said.

“But when the kids have to go to school, you can’t give them that experience. It’s really frustrating.”

Muslims say having excused absences and no tests on Eid days don’t solve the problem.

“There are field trips and sports and other activities that go on. Those who are absent will still be missing a lot,” said Samira Hussein, who helped start the Eid equality effort in Montgomery County several years ago.

Shraim said that while she is disappointed that this Eid is not an official holiday, she is hopeful it may be before she graduates high school.

“I love being home from school on Christian and Jewish holidays so they can be with their families and celebrate. It’s an awesome thing,” she said. “And I think more people will feel that way about Muslims.”

* Editor’s note: This story was updated on Oct. 15 with the absentee rates for Montgomery County schools, which were provided after the original story was published.

The post Muslims say they deserve school time off for holidays, too appeared first on Religion News Service.

Previous POLL: Is it OK for sports teams to use Native American names?
Next “Hurricane” by Natalie Grant

I don’t know if this complaint is so much about discrimination per se. I think it’s more about Christian privilege. The fact that the state-mandated “secular” holidays match up with Christian holidays is clearly not an accident. A majority Christian culture made the laws.

Personally, I think we need to restructure much of this part of our culture, but in a country where 46% of Americans deny the basic science of evolution, I doubt very much that the Christian privilege that Omar is decrying is going anywhere. If we have science teachers teaching genesis as truth, then we have a LONG way to go.

Of course the idea that Muslims should get special holidays is itself an example of Islamic privilege. This is the way religion works. It is always a system that privileges some at the expense of others.

Heck, look at the idea of heaven: It’s basically the idea that after you die, you will go to the big privileged in-group in the sky. Religion is always an us-and-them proposition.

This is why we need better separation of church and state. That way it’s unfair to everyone equally.