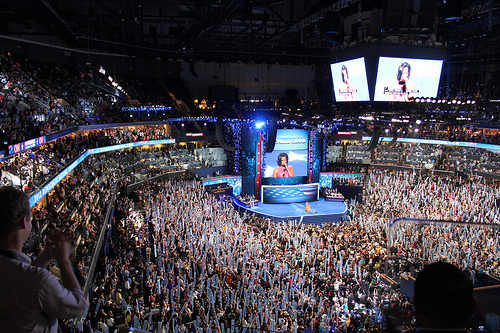 The number of Muslim delegates attending the Democratic National Convention has quadrupled since 2004, according to a Muslim advocacy group.

The Washington-based Council on American-Islamic Relations counts more than 100 Muslim delegates representing some 20 states at the Democratic convention in Charlotte, N.C., this week. That's up from 25 delegates in 2004, according to CAIR.

CAIR government affairs coordinator Robert McCaw said the numbers were ”a sign of the American Muslim community’s growing civic engagement and acceptance in the Democratic Party.” He also said that Democrats had targeted outreach to American Muslims.

A “handful” of Muslims were delegates at the Republic National Convention last week in Tampa, Fla., McGraw said. Campaign officials for Mitt Romney, President Barack Obama's GOP challenger, did not respond to a request for comment.

Neither Republicans nor Democrats invited a Muslim cleric to deliver a blessing during their conventions, even as Christian, Jewish and Sikh leaders received invitations.

Most Muslim Americans voted Republican through the 2000 presidential election, but switched allegiances after the Patriot Act and other post-9/11 security policies, which some Muslims believe unfairly target their community. And while former President George W. Bush called Islam a “religion of peace,” some conservative Republicans now push for state laws to ban Shariah, Islamic law. The national GOP platform approved last week declares that U.S. courts should not consider foreign laws in their decisions.

Edward E. Curtis IV, a religious studies professor at Indiana University-Purdue University Indianapolis, said that many Muslims have been disappointed by Obama's foreign policies, particularly civilian casualties in Iraq and Afghanistan and the lack of progress toward a peaceful solution to the Israeli-Palestinian conflict. But, “in the end, the decision to support Obama is a decision to defend Muslims against Islamophobia,” Curtiss said.