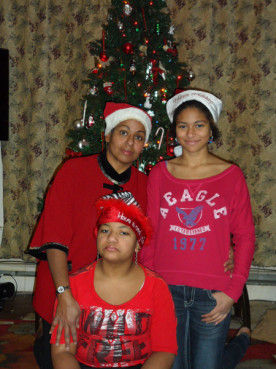 (RNS) A generation or two ago, when America’s Muslims were new immigrants who made up an even smaller minority of Americans than they do today, the lights, trees, carols, gifts and festive spirit of Christmas were viewed by many Muslims as a threat to their children’s Islamic faith.

But these days, a growing number of Muslims celebrate Christmas, or at least partake in some ways, even if they don’t decorate their homes with trees and a light show. Indeed, many Muslim families have created their own unique Christmas traditions.

“I teach my three children, who attend public school and happen to be born into an interfaith Christian-Muslim family, that we absolutely do celebrate Christmas because we are Muslim,” Hannah Hawk of Houston wrote in an email. Rather than putting up a tree or lights, “we celebrate the reason for the season, Jesus, by studying all that is written about him in the Quran and by examining historical theories.”

The Hawks also give to charity, bake treats for neighbors, invite them to dinner, and wish friends, colleagues and teachers “Merry Christmas” with cards and phone calls. Hawk’s kids get together with Christian friends to perform various good deeds. This year, they will play songs (violins, viola, trumpet, cellos, bells) at a local community hospital for patients recovering from surgery.

To be sure, some Muslim leaders still criticize Christmas celebrations as assimilation gone too far.

Imam Muzammil Siddiqi, a former president of the Islamic Society of North America, has argued that Muslims should not celebrate Christmas because the holiday commemorates the birth of a figure revered by Christians as the Son of God, which violates Islamic beliefs.

“We should tell our children that we are Muslims and this is not our holiday,” Siddiqi said in comments posted at the website OnIslam.net. “This is the holiday of our Christian neighbors and friends.”

To protect their children from the attraction of Christmas, he said, Muslim parents should take advantage of Islamic camps and conferences established at this time of year for this very reason.

But others see a new generation of Muslims born or reared in the United States who feel secure enough to view Christmas as another tradition they can relate to, and to celebrate it in a wide variety of ways — as do their Christian neighbors.

“Muslims should join their Christian neighbors to celebrate Christmas,” said Rizwan Kadir, a financial adviser who is active in his Muslim community in suburban Chicago. “We also believe in Isa,” Kadir added, using the Arabic name for Jesus, “and he has a very special place in Islam.”

While Muslims don’t believe Jesus was crucified or that he is part of the triune Godhead, they do believe in the Virgin birth, and claim Jesus as a prophet — a predecessor to Muhammad — who ascended to heaven, and will return as part of the Second Coming.

Kadir adds that Muslims shouldn’t retreat from Christmas festivities. His family doesn’t put up a tree or lights, but Kadir does go to holiday parties at work, wishes friends and neighbors a “Merry Christmas,” and watches “It’s A Wonderful Life,” and “Home Alone” — a Kadir family tradition.

“To me, those are just fun things that people do around this time of year,” said Kadir. “It doesn’t make you a Christian. It doesn’t mean you’re compromising your faith.”

That view, however, has taken time to evolve.

Zeyna Ahmed, the American-born daughter of Egyptian parents, remembers that her mother liked some aspects of Christmas. But her father “stifled it.”

“Their way of holding on to their heritage was just pushing everything that was Muslim,” said Ahmed, who lives in Easton, Pa.

When her four children started asking why the family doesn’t celebrate Christmas, she felt it wasn’t adequate to say, “because we’re Muslim,” since “we also believe in Jesus,” Ahmed said.

So, for the last seven years, Ahmed, who is divorced, has celebrated Christmas with a tree, lights, and acts of charity. She also gets a menorah for Hanukkah and cooks a big meal on the last night.

“I want to expose them to different traditions,” Ahmed said, referring to her kids. “I feel like if you respect their holidays, they’ll respect our holidays. It develops mutual respect.”

Hawk agreed. “Christmas, like Ramadan, is the perfect interfaith footbridge for Muslim-Christian fellowship,” she wrote. “Both are the perfect times to hold interfaith vigils, pray together for peace, and pledge to uphold God’s message to spread goodwill and reach out to and help the less fortunate in our society.”

Some Islamic leaders have come on board, too.

Imam Talal Eid of Quincy, Mass., a former member of the U.S. Commission on International Religious Freedom, cited the 13th verse of the Quran’s 49th chapter, which states that God created “peoples and tribes that you may know one another.”

And, he added, at a time when some Christians and Jews in America have fasted in solidarity with Muslims during the Islamic holy month of Ramadan, Muslims should reciprocate.

“This is not about theological details,” said Eid. “This is a matter of fellowship and social activity. There is nothing wrong with exchanging gifts and participating.”