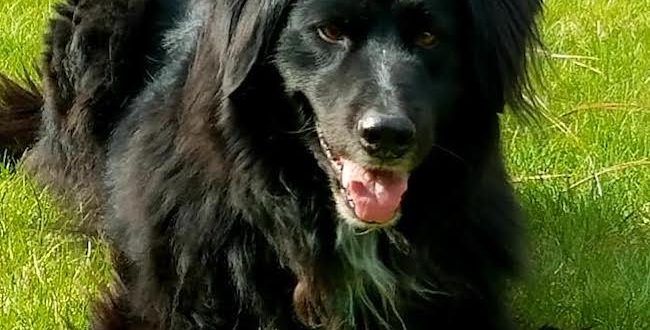 Murphy died last week. And I am devastated.

He was a dog. A giant mix of black lab and something else. He was hairy. He was also gentle, loving, and loyal, the sweetest dog I ever knew.

And he was not ours.

Murphy belonged to our across-the-street neighbors. Connie had adopted Murphy from a shelter when he was about five months old and when she was single. Her husband, Bob, happily adopted the dog when he and Connie got together.

My dear wife, Carla, known to her friends as something of a dog whisperer, got to know the neighborhood dogs within days of our move to this tree-lined South Hill neighborhood six years ago. At the time, we still had two amazing border collies of our own who lived in our North Side house where they had room to run, important for border collies.

Our best friend cared for them and Carla visited several times a week.

But when it comes to dogs, there is plenty of room in her heart for all comers.

In our new neighborhood, Murphy lived across the street. Next door was Koda, another big black dog, but very, very old, blind and hard of hearing. His running mate was Capone, some sort of shepherd/bull terrier mix.

Down the street lived another big black lab mix, Wilson, who would escape his fenced backyard to occasionally deposit a bit of love on our unfenced back lawn.

Carla kept a big jar of dog biscuits on our kitchen counter and all the dogs in the neighborhood knew when she was due home from work and how to wheedle a biscuit before she could set down her briefcase.

And now, they are all gone.

Our border collies, both 13 which is old for that breed, died within months of each other in 2019.

Koda died some years back of old age. Capone had to be put down after he murdered a neighbor’s cat, the second of the woman’s cats to meet its end in Capone’s steely jaws.

Wilson escaped his backyard once too often and was killed by a car not too long ago.

And then Murphy died last week.

Other than our border collies, King and Mollie, Murphy was closest to us, especially Carla. He was part of our family.

And there is a story in that.

Murphy’s folks are adventurous travelers. They were often able to take Murphy with them when they went skiing or boating or camping. But finding a good dog sitter was tough when they left town for extended periods. Off again shortly after we moved in, they had to find a backup caretaker at the last minute and so hired a neighborhood boy, supposedly reliable.

But Carla noticed within a couple of days that the boy was not coming around, was not letting Murphy out, walking him or feeding him regularly. One morning, she sat on the neighbor’s porch waiting for the boy to show up. When he did, she fired him. There was no way to let Connie or Bob know. But Carla decided she could do far better by Murphy and would seek permission later.

Murphy came to view our house as his second home. Out for a walk, he would dash over, dragging Connie or Bob with him, and move immediately to the kitchen where the dog biscuits were kept.

At our house he had his own dishes and his own dog toys. He and Carla would play keep away in the front yard on warm summer nights. Sometimes he would sit at my feet on the front porch while I smoked a cigar and sipped a single malt or sit with me in the backyard while I barbecued burgers or a steak.

Murphy was with us last summer when protesters showed up at the home of another neighbor, Dr. Bob Lutz, the Spokane County health officer, who was attempting to manage the pandemic response.

The anti-mask protesters were a noisy mob, carrying signs and shouting slogans prompted by their bullhorn-carrying organizer.

Murphy was off his leash, sitting on the porch or in the front yard, just watching. Never barking, never making a move.

At one point a police officer walked up to Carla and told her she owned a wonderful dog, a real sweetie. Carla merely said, “thank you.”

Murphy was old, approaching 17 when things began to go wrong a couple of months ago. It was clear the end was coming.

We had him for 10 days just before he died. It was an important time, especially for Carla. She got to give him biscuits, sit on the floor by his side and give him good dog kisses. He was especially affectionate with me, big enough to put his head in my lap for some good behind-the-ear scratching. I think he knew our time together was coming to an end.

Connie and Bob had made an appointment to see a veterinarian just as they came back from their most recent trip. The vet catalogued a variety of problems, particularly arthritis and the hip displacement that had caused it and that had made it difficult for Murphy to walk or even stand. For a big dog, that is always the end. He was put down, gently and with his human parents by his side, last Wednesday.

When Mollie and King died, Carla was devastated for weeks. She still cries when she talks of them. Murphy’s death elicited the same reaction, and he was not even ours. And I felt it too.

All of which led me to wonder about the relationship of people and pets, especially dogs. As journalists, both Carla and I chronicled the endless suffering of humankind – murder, mayhem, natural disaster, child abuse, substance abuse. In time, as with all first responders, we had to harden ourselves to the horror or go crazy.

But pets, especially dogs, are another matter altogether. Carla can listen to the news about some recent human tragedy and think in journalist terms. But those horrible ASPCA ads featuring tortured animals will send her running from the room in tears. I know so many people who are the same.

I grew up with pets, mostly dogs. I vowed years ago not to have another pet. It is just too hard to say goodbye. I married into the border collie family, but still, I saw them as dogs.

To Carla, they were essentially human. Especially King, the smartest, most human-like dog I ever encountered. He had people eyes. But to me, he and Mollie were still dogs. I had not raised them from pups and never lived with them. When they died, I hurt more for Carla.

But Murphy. I did not want to be close to a dog again. I knew he was old when we moved in, that he would be gone soon enough. But I came to love him anyway.

And I miss him.

The other evening, I found a clump of Murphy hair blowing around the living room. I paused before picking it up. It seemed wrong to be tossing even that faint little reminder of that big, sweet dog.

Why do we mourn so for dumb animals?

That was Murphy. He had a heart big enough for two families. And I miss him more than I ever thought possible.

Previous Prejudice — You’ve Got To Be Taught
Next Ask A Muslim: Reconciling Feelings Around Prophet Muhammad