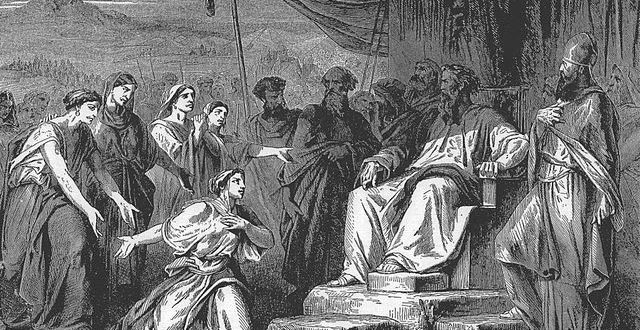 Most Powerful Women in Scripture: The daughters of Zelophehad

We recently SpokaneFāVS posed this question to its team of writers:

Who are the most powerful women in the Bible and why do you think they are good examples for today?

We’ll post our columnists responses throughout the week, and readers, we’ll hope you’ll chime in too!

Then the daughters of Zelophehad came forward. Zelophehad was son of Hepher son of Gilead son of Machir son of Manasseh son of Joseph, a member of the Manassite clans. The names of his daughters were: Mahlah, Noah, Hoglah, Milcah, and Tirzah. They stood before Moses, Eleazar the priest, the leaders, and all the congregation, at the entrance of the tent of meeting, and they said, “Our father died in the wilderness; he was not among the company of those who gathered themselves together against the Lord in the company of Korah, but died for his own sin; and he had no sons. Why should the name of our father be taken away from his clan because he had no son? Give to us a possession among our father’s brothers.” Moses brought their case before the Lord. And the Lord spoke to Moses, saying: The daughters of Zelophehad are right in what they are saying; you shall indeed let them possess an inheritance among their father’s brothers and pass the inheritance of their father on to them. You shall also say to the Israelites, “If a man dies, and has no son, then you shall pass his inheritance on to his daughter. If he has no daughter, then you shall give his inheritance to his brothers. If he has no brothers, then you shall give his inheritance to his father’s brothers. And if his father has no brothers, then you shall give his inheritance to the nearest kinsman of his clan, and he shall possess it. It shall be for the Israelites a statute and ordinance, as the Lord commanded Moses.”

And here’s what I get out of it:

There was a law in place that made it impossible for women to inherit, which meant that land was moving out of the family just because the only offspring were female. So some sisters banded together and went to what today might be the court system, and they made their case. They spoke up for themselves. Their case was considered between Moses and God, and God told Moses to change the law.

It was a small change, and the law still favored the patriarchy, but it was a step in the direction of treating women like equal human beings. The sisters did not accept their fate – instead of acting powerless, they went against all expectation and asked for change, and it was granted to them.

This has three significant implications.

1) The law of God is fluid. It can change as people change.

3) The women were clever because they had to be: They used what they knew – the importance of family – and made their case based on family, rather than equality of women to men. They took a route that they knew would be accepted. I see women do this often today, and it is sad that it is necessary. The argument that women should be given equal opportunity as men is either dismissed or avoided, so women use other avenues to get what they want and what they need. I view this as women valuing themselves. They refuse to wait to take care of themselves until men get the picture. The daughters of Zelophehad refused to accept their situation because they cared about their own well-being, so they found something that worked to make their situation better. It’s a dangerous tool, because women may end up doing a lot of damage to themselves in trying to sneak out of the patriarchy the back way, but I think it’s a tool that can be used well.

Previous Ask A Jew: Are the Jewish people of today the true Jews from Israel?
Next Theroux’s re-enactments in Scientology documentary prompts criticism