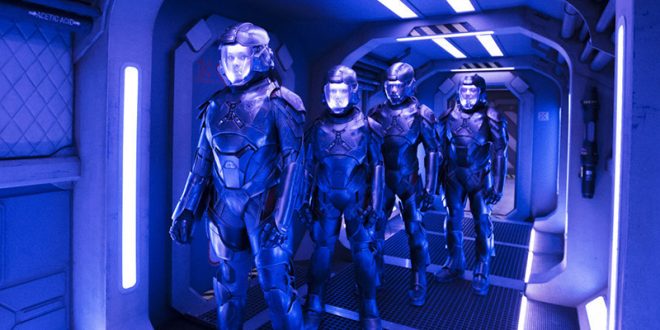 A scene from Season 2 of “The Expanse.” Photo courtesy of Rafy/Syfy

Mormons in space: Sci-fi or no lie?

(RNS) — A giant spaceship is under construction somewhere in the solar system and bears the name “L.D.S.S. Nauvoo,” with a golden angel tooting a horn on its bow.

Its mission: to carry members of the Church of Jesus Christ of Latter-day Saints to outer space to preach their message to other peoples. The ship’s name is a hat tip to the Illinois town from which 19th-century Mormons launched their terrestrial journey to Salt Lake City.

This is a scene from the Syfy channel TV series “The Expanse,” a suspenseful, clash-of-civilizations tale wrapped around a detective story. And while it features lots of out-of-this-world elements (Martian armies, destructive “protomolecules,” etc.), its Mormon storyline may be familiar to many science fiction fans who have come to appreciate how Mormons and their faith are frequently the creators, subjects and consumers of science fiction, perhaps more than any other faith group.

“I am trying to think if I have known any Mormons who aren’t interested in science fiction, and I am thinking ‘no,’” said James McGrath, a professor of religion at Butler University and author of “Theology and Science Fiction.

In 2010, the blog Mormon Artist asked, “Is it something in the water? … From book publishers to bloggers to scholars of Mormon culture, a number of people have noted the success of Mormon authors, particularly in the genre of science fiction and fantasy, and have speculated as to why Mormons seem to be unusually well-represented in this field.”

Mormons have won top honors in the otherworldly realms of sci-fi and fantasy since 1986, when Orson Scott Card‘s novel “Ender’s Game” took both the Hugo and Nebula Awards. Card repeated that stunt a year later with “Speaker for the Dead.”

Brigham Young University, the flagship LDS school in Provo, Utah, holds an annual academic symposium on science fiction and fantasy titled “Life, the Universe and Everything,” with offerings that range from workshops for wannabe sci-fi authors to scholarly presentations on the sci-fi genre.

Then there is the sci-fi by non-Mormons but with Mormon characters or storylines —Greg Bear, Arthur C. Clarke and Robert Heinlein all explored Mormonism in their work.

And try to find a Mormon who doesn’t know “Battlestar Galactica.” The television series, created by LDS church member Glen Larson, was built on a foundation of Mormon theology and cosmology.

What makes for such a perfect marriage between science fiction— sometimes called “speculative fiction” when paired with the fantasy genre — and Mormonism, a pioneer-age faith that originated with an unschooled American farmer?

Part of the answer lies with Joseph Smith, founder of the LDS church, who wove the concept of other worlds and beings into Mormonism itself. Smith taught that God has “flesh and bones” and inhabits a physical place in the heavens. In “The Pearl of Great Price,” written by Smith in 1836, he describes the throne of God as somewhere near a star or planet called “Kolob.”

“And worlds without number have I created,” God says in “The Pearl of Great Price,” which Mormons consider scripture. At least one contemporary of Smith’s recorded that Smith believed there was life on the moon.

Smith also taught that human beings can progress to become divine, a parallel to the science fiction theme of the progression of the human species.

Both of those teachings have continued through contemporary times. “We are not the only people that the Lord has created,” LDS church President Joseph Fielding Smith said. “We have brothers and sisters on other earths. They look like us because they, too, are the children of God and were created in his image, for they are also his offspring.”

McGrath, the Butler University professor who studies religion and science fiction, said Smith’s cosmology has to be understood through the prism of his times, when astronomers, armed with ever bigger telescopes, explored deeper into the solar system than they ever had before.

When we encounter new scientific information we can either ignore it or adjust, McGrath said.

“If you adjust, then it changes your theology,” he added. “That is no less true for any other group than it is for Mormonism.”

So when science peered beyond Earth’s atmosphere and did not find proof of God, Smith adapted Christian theology and placed God’s throne somewhere much more distant — but a real place that, given the right technology, humans could travel to.

Which is where “The Expanse” comes back in. With overpopulation straining 23rd-century resources, the story’s Mormons are looking to escape religious persecution for their large families.

And that, wrote Scott D. Pierce in The Salt Lake City Tribune, “is, of course, how Utah was settled.”

Steve Evans, a Utah-based lawyer and founder of the Mormon blog “By Common Consent,” said he appreciates it when science fiction creators like those behind “The Expanse,” which he watches, do their research and present Mormons seriously.

“I don’t look to these shows to connect on a faith level, but it is meaningful to see us being represented,” he said in an email interview. “There’s nothing worse than some caricature of your faith that’s just onscreen as some quirky sideshow to bolster a weak script . . .  It means a lot when people ‘get’ us.”