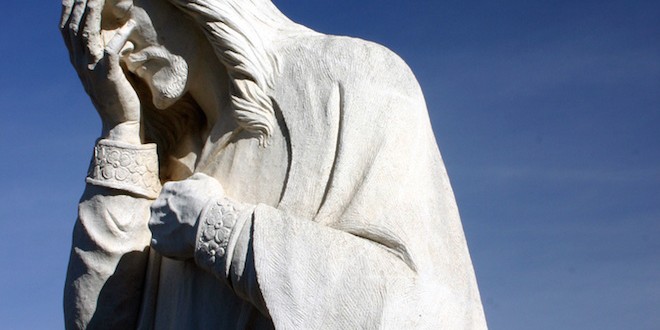 Last week I wrote about our growing inability to grieve over the suffering that exists in our world. But I also said I had to wait for what God wanted to show me before writing my next blog. He did. Oh, boy, did he ever!

It’s one thing to grieve for somebody else — to share in a pain that is, in human eyes, irreversible and final. It’s something else to grieve for yourself. We also have lost the capacity to do that.

I realized that I was grieving over a loss in my life that had never been fully brought to God. It came back to life so ferociously that I was taken aback and became unable to cope, unable to hope, unable to see God. I went to bed Monday night after praying the only prayer I could pray: “God, please make this agony end.”

I awoke the next morning and it was as if I’d been resurrected. But I also thanked God for demonstrating that grieving is really the starting point for something better.

Jesus Christ came to us in flesh and blood, in part, to enter our grieving and tell us he grieves with us. He wept with Mary and Martha at the death of Lazarus. He wept over Jerusalem in Luke 13:34 and Matthew 23:37.

Jesus weeps over us, too. The question is whether we will ignore Him as Jerusalem did or heed Psalm 95 and Hebrews 3: “If today you hear God’s voice, do not harden your heart.”

Grieving, as I said, only occurs when a situation is irreversible. In God’s eyes, nothing is irreversible, but his first step is validation — acknowledging the reality of my experience. When Jesus entered my suffering on Monday, he didn’t scream at me, rebuke, scold or chastise me. In the midst of that pain He simply was present to me. He was telling me my pain was valid.

When I awoke, and was able to see what I couldn’t see the night before, God didn’t scream at me, rebuke, scold or chastise me for not having understood any of that before. He simply helped me celebrate His victory in me. Like Lazarus, he raised me from the dead.

By entering my suffering Jesus reveals that I am of value to him — so valuable that he also wants to deal with the pain caused by well-meaning but seriously wounded parents, by preoccupied and/or profit-driven employers, by equally wounded family members, or by whatever other forces there are.

This week’s healing isn’t the first time he has done that, and it may not be the last, because healing can take a lifetime.

This and the other healings he has accomplished have had a profound effect on me. I not only can forgive those who wounded me but also can forgive myself for coping with my pain in ways that caused pain to others. I can say, as Jesus did while being nailed to the cross, “Forgive them, Father, because they don’t know what they’re doing.” If he hadn’t said that I wouldn’t be able to forgive myself or others.

Many times, rather than fix a particular wrong, God changes my perspective. In this latest healing He gave me the grace to see there’s much more to life than the missing part over which I still grieve. The pain will always be there, but it will be muted because of the new life I’m being drawn into.

But I must acknowledge that God alone does all this. If I try to fix others’ problems on my own – if I, as a “Christian,” ignore someone else’s grieving and try to impose God’s healing — I wind up treating those others as problems to be solved or projects to be tackled. I won’t validate them. On the contrary, I’ll insult and dishonor them by ignoring their pain.

When I grieve over the pain that governs our world — and, by God’s grace, I now have a deeper capacity to do so — I come closer to him because this is part of who God is. As I grieve — as I confess my (and our) total inability to reverse the unending pain of human suffering — I cry out with confidence for Jesus to make things right, just as he is doing for me.

But I also bring healing. I do so through prayer, which is how I express my trust that God can and will overcome. I do so by telling others what God has done for me and will do for them. And I do so, on occasions that God creates, by giving something tangible (time, money, effort) for their sake, as James talks about in his New Testament letter.

This is how I become Christian. “Christian” is a name, not an adjective, that, literally defined, means “little Messiah.” That’s not the way most Christians see themselves. What a pity. That name is meant to be my/our identity. It’s God’s will for me/us. It’s the role God meant for me as His child. And it’s also the role he meant for you.