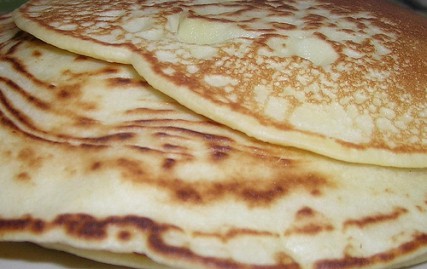 Call if Shrove Tuesday, Fat Tuesday, Mardi Gras – whatever you want. Whatever you call it, tonight, on the eve of Lent, many Christians will feast on pancakes.

Why pancakes, you ask? Because it's tradition. Nowadays most people give up something like chocolate or meat during Lent, but once upon a time people commonly gave up eggs, sugar and flour. Pancakes were a good way to use up those ingredients before the Lenten fast. Lots of churches are having pancake dinners tonight.

You can find listings here. Or, if you want to stay at home, here are some tasty Fat Tuesday Recipes.

Previous Dehumanizing the outsiders, elderly, disabled and poor
Next Practicing prayer during Lent

The goat cheese pancake sounds really good!
Now is Lent a holiday/festival… Can I say happy Lent? (I am thinking of Ramadan when we greet each other saying “happy Ramadan”). Anyway, happy Lent 🙂