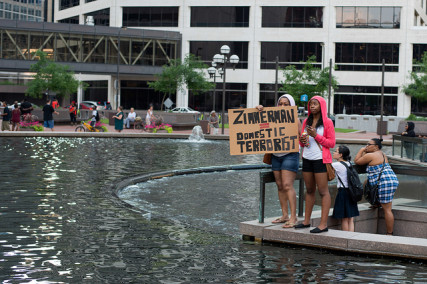 Death threats were the last type of phone calls George A. Zimmermann thought he’d get after serving for 55 years as his Pennsylvania community’s preacher.

And he never thought he’d be mistaken for the man headlining news these days: George Zimmerman, the Sanford, Fla., neighborhood watch volunteer acquitted in the fatal shooting of unarmed teen Trayvon Martin in February 2012.

Zimmermann, 78, retired to Deland, Fla., 16 years ago from his post at Georgetown United Methodist Church in Paradise, Pa. He said his time in Florida had been relatively peaceful and uneventful — until the phone calls began trickling in.

According to Zimmermann, he started receiving the calls immediately after Zimmerman (with one n), 29, shot the teenager.

“In the beginning, I received four or five calls,” Zimmermann said. “I’d say, ‘Hey, you got the wrong person. I don’t live in Sanford.’ And then it stopped.”

Until the first night of the trial.

On June 25, Zimmermann was awakened by two calls in the middle of the night from protesters, although he said they were tame in comparison with the one he received July 14, a day after the verdict was reached.

Zimmermann, who was not home at the time of the call, recorded the message on his answering machine. He reported the incident to the Volusia County Sheriff’s Office.

“I know they’re venting their emotions, but I had no idea that my name would create such a hassle,” he said.

Zimmermann said a couple of the calls he’s received have been from out-of-state numbers, but more have been from Florida. He has changed his phone number, and since July 14, he has not received any more intimidating calls.

“But I guess when you’re upset you do things without rationally thinking about it,” he said.

Since Martin was killed, a number of individuals with unintentional ties to Zimmerman have been accosted in similar cases of mistaken identity:

• A Florida man who had never owned a cellphone before being released from prison in May 2012 was randomly assigned the number Zimmerman was using when he called 911 the night he killed Martin. Junior Alexander Guy, then 49, received multiple intimidating phone calls before changing his number.

• Lori Tankel of Winter Park, Fla., was forced to change her number after receiving nearly 100 calls from protesters assuming she was Zimmerman, reports WFTV. Her cellphone number was one digit removed from Zimmerman’s old number.

• Although he lived thousands of miles away from Sanford, Jorge Zimmerman of Cumberland, R.I., received nearly half a dozen or so angry messages sent to his Facebook page from individuals accusing him of murdering Martin, says Rhode Island news station WPRI. He has deactivated his Facebook account.

Previous POLL: Are your religious beliefs visible on your car?
Next Cycling through Spokane for fair, better housing