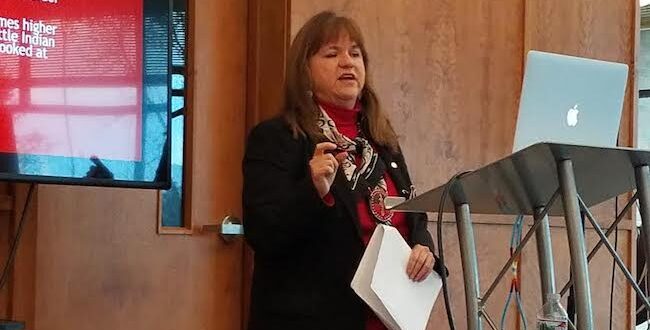 “Indigenous people have suffered from historic injustices; their colonization and dispossession of their lands, their territories and resources,” Hill said paraphrasing a United Nations declaration statement on the rights of indigenous peoples.

The Story of Marlene

Throughout the presentation, Hill shared several stories about indigenous women who faced violence, abduction, human trafficking and other attacks. One Northern Cheyenne woman she knew, whom she referred to as “Marlene,” went missing, was found half-clothed in a Spokane alley and was taken to the hospital.

The statistics Hill presented, from the National Intimate Partner and Sexual Violence Survey from the Centers for Disease Control and Prevention (CDC), showed that 84.3 percent of Indian and Alaska Native women have experienced violence in their lifetime and one-third of all American Indian will be raped in their lifetime.  She also showed that the National Crime Information Center (NCIC) found that, as of 2016, 5,712 American Indian and Alaskan Native women and girls were reported missing.

One issue, Hill described, involved critical issues of tribal jurisdiction, including the Supreme Court ruling on Oliphant v. Suquamish Indian Tribe, which stated tribes have no criminal jurisdiction over non-natives. Other issues included shortage of tribal law enforcement, institutional racism, federal, FBI and U.S. Attorney’s Office often declining to prosecute, state patrol telling tribes their insurance won’t cover activities on reservation, and others. However, she later said that she has seen a change in the U.S. Attorney’s Office where they are responding to cases happening on reservations and prosecuting perpetrators.

“We need to enhance jurisdiction over crimes of domestic violence, we need the tribe to have the ability to protect our women from crime, from violent crime and it shouldn’t depend on if the boyfriend, or the husband, what their race is; it shouldn’t depend on that,” Hill said. “It is immoral for Indian women to be left vulnerable to violence because of their abusive spouse.”

Hill described an incident three years ago where her niece was assaulted on tribal property and the perpetrator fled to Canada.  However, he was finally arrested and extradited.

“Ten years ago, the U.S. Attorney’s Office simply sent us a letter declining these cases. Today they are taking it seriously,” she said. “Today, they are stacking our cases, they are meeting with families, they are hearing the facts.”

With law enforcement, Hill said there were times where the Spokane Tribe had great relationships with them, such as the City of Spokane working with tribal police and having SWAT drills out on the reservation.

Another issue involved the media. She said most native cases aren’t covered.

“The popular narrative that you are going to see in the media, when it talks about murdered and missing indigenous women, will maybe be somebody that’s in the sex trade, maybe somebody that’s using drugs,” she said. “But that’s not always the case. Often times we know our perpetrator, we know the person that is doing physical harm to us.”

She later said that the media and language used by them is often victim-blaming because the victims are described as sex workers, gang members or as having a criminal history.

Other obstacles that indigenous women face, Hill described, include vulnerability to human trafficking, prosecution challenges such as proving coercion, victims being reluctant to cooperate with law enforcement, having difficulty articulating the complex feelings and the trials being a hard experience on victims.

With human trafficking cases, she said they have been diffiuclt to detect because they are primarily internet-based, victims are promised a better life and a chance to earn money and drugs are typically involved, among other aspects.

Despite the incidents, statistics and risk factors, Hill said there are solutions to the issues surrounding Native American women. These solutions include collaborative efforts across jurisdictions regarding tribal, state and county, standardized protocol for responding to cases of MMIW, resources for law enforcement, tribes creating better policies to address sexual harassment and assault and U.S. attorneys stepping up and prosecuting, among others.

Not only that, the Choctaw Nation developed guidelines for treatment of human trafficking victims. These involve housing the victim in a shelter rather than detaining them in jail or penalizing them, and providing them with medical care, food, legal assistance and protection if their safety is at risk.

Still No Justice For Marlene

At one point during the presentation, Empero Corral, a member of the Spokane tribe, sang a song while playing a drum for the audience as a prayer for healing, women, families and children.

Near the end of the presentation, Hill discussed the significant role Native American women play in leadership roles, citing the elections of congresswomen Rep. Deb Haaland (D-NM) and Rep. Sharice Davids (D-KS) as examples of Native American women asserting their ancestral right to leadership in society, which was taken away from them by colonialists centuries ago. She also cited Diane Humetewa, who is one of three Native Americans in history to serve as a federal judge.

Alicia Finch, a senior communications student at Gonzaga and Spokane tribal descendant, said after the event that people should listen to indigenous women and let them lead, as they saw with Hill and take her lead.

The next event in the series will take place on Dec. 5 at 4 p.m. in the humanities building.

Previous Ask A Catholic: Is Mary Co-Redemptive?
Next Food Insecurity and Ex-Convicts