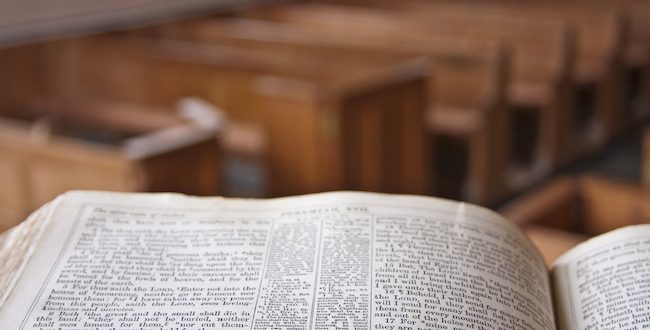 A bible in a church pulpit overlooking the church/DepositPhoto

Minister for a Day

Before I joined The Church of Jesus Christ of Latter-day Saints, I attended Mission Community Presbyterian Church. I went to youth group, sang at church, and was made one of the youngest Elders of the church in their history at age 16. I even heavily considered going into ministry or becoming a military chaplain.

But life has a way of throwing curveballs at you, as I’m sure you’re aware. I began to ask questions about theology and doctrine. I had a voracious appetite for learning not only about my own faith, but others as well.  Unfortunately, I wasn’t getting the answers I was seeking from my church at the time.

That road of study and pondering eventually led me to missionaries for The Church of Jesus Christ of Latter-day Saints, where I found my questions answered, and soon I was baptized a member at the age of 19. After that, the thought of becoming a minister for the church I attended as a youth became a thing of the past.

So I was somewhat surprised when a friend asked me to come to be the minister for a day at his church. I know what you are thinking, why invite someone from a different faith tradition to be a minister at your church for the day?

My friend attends Wilbur Community Church. This church is made up of two congregations, both of different faith traditions. The Presbyterian Church in town, facing a crisis of dwindling numbers is in the process of merging with the Lutheran Church, who also faced the same issue. Beyond the problem of limited congregants, it is a challenge to find a minister who wants to move to and invest in a small, rural community. Because of that challenge, they are forced to find pulpit fills for their Sunday services until a permanent replacement minister can be found.

In a lot of ways, this strikes home to me, as the church that I went to as a kid, no longer exists. It also faced a crisis of dwindling membership, an aging population of attendees, and a lack of youth to carry the church forward. I actually don’t think this is an uncommon occurrence. I think there might be a lot of churches facing the same issue, but I don’t have the proof to back that up.

So what led to me being asked to be minister for a day?

My friend, knowing that members of the congregation of my current church give talks on Sunday, asked if I would be willing to come and talk to his congregation. My response was something along the lines of, “You know I’m a Latter-day Saint, right?” But it didn’t matter to my friend, and apparently, it didn’t matter to the church council, who eagerly invited me and my family to attend and speak for the Sunday worship service.

So we packed up our family and headed west to Wilbur Community Church’s Lutheran Campus. The Community Church maintains both the existing Presbyterian Church Campus and the Lutheran Church Campus, and they rotate every other Sunday. I knew this would be a new experience for my family, but it would be sort of like a homecoming for me. And in a lot of ways, it was. There was some Lutheran tradition, which I wasn’t familiar with, but the Presbyterian tradition I had grown up with brought such a feeling of nostalgia.

The congregation was so friendly to us, and after I got done preaching about the parable of the lost sheep in Luke 15:1-6, they all came up to thank me for being there and speaking to them. In fact, the pastoral search committee even asked if I wanted to come back and speak to them again. My friend even joked that I could move to Wilbur and be their minister. I was flattered, but I told them I had a congregation that I belonged to.

Think of that for a moment. A combination church of Lutherans and Presbyterians, asking a Latter-day Saint to come be their minister for a day, or for two. I think this is something that doesn’t happen often, or ever at all. Which makes it extremely surreal and something I, or my family will never forget. But it does go to show that there are principles and truths that we can all unite behind. As disciples of Jesus Christ, we were able to come together as three faith traditions and worship as one. There were no lines of denomination that Sunday, just people there to praise God and speak about the love of the Savior for his people.

Now I’m not saying that we should blend all our church’s and make everything homogenous, our faith background is what makes us unique and gives us a different perspective of the world. I think that if we spent just a little more time finding things that we have in common as believers, then pointing out our differences, we would be a lot better off in the world.

I believe we could all take a page out of Wilbur Community Church’s book and reach across denominational lines. We may not agree with every point of doctrine from our friends and neighbors, but we may find that we can learn something from each other, and about ourselves, and in the end our own faith will probably grow stronger in the process.