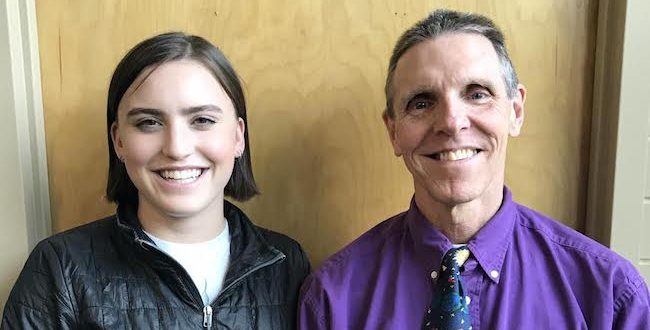 Mallory Plaster, a nursing student at the Washington State University Spokane campus, and Barry Barfield, a teacher at Gonzaga Preparatory School, will be co-hosting an hour-and-a-half long mini-retreat titled “Be Still: Rediscovering God’s Magis Within the Silence” on June 14 from 11:30 a.m. – 1 p.m. at Immaculate Heart Retreat Center.

A Gonzaga Prep alumna, Plaster said the event was inspired by the work she had done with the retreat center since her time in high school and the retreats she had worked on at Prep.

“I spoke at Immaculate Heart’s Hope, Peace and Healing event, which is their main fundraising event,” Plaster said,  “and then after that, I was asked to sit on a committee for point-of-entry events.”

These events, she said, were where people would come to the retreat center, walk the grounds, better understand the center and “get a feel for the place.”

Because of her young age, Plaster said she was asked to spearhead an event that would attract the younger population to the center because a lot of the people who regularly attend mass and retreats, and donate to the center, are part of the older population.

“Retreat ministry was really really popular in the 50s, 60s and 70s, and it’s kind of gone downhill now so they’re trying to get it going again,” she said. “Basically, the motivation behind this event was to attract younger people, college students, high school students and young adults and anybody who wants to come to the event.”

The event, Plaster said, is to introduce them to retreat ministry if they have not already been introduced to it.

Due to the age difference between the two hosts, Barfield said that the event can be for both the young and old and can have something, potentially, for everyone.

“So whether you’re a twenty-something or a sixty-or-seventy-something, you’ll probably be able to connect with the co-hosts in one way or another,” he said.

At the event, Barfield said that Plaster will provide opening instructions on prayer and quiet, and he will hear from attendees why they are participating and hope to get out of event.

During the event, Plaster said, attendees will learn more about what Magis means from her and Barfield, as well as the important role silence can play in their lives and connection with God.

“We’re gonna talk about how, in this day and age, we rarely get silence,” she said, “there’s always a TV going or you’re on your phone, or you’re going to work or going to school and there’s never a moment to sit and breathe.”

She said they will be talking about how the lost art of silence can nourish their souls and lives.

After the talks on Magis and silence, Plaster said there will be 30 minutes to walk the grounds of the retreat center and have quiet reflection.  She said there will be handouts from the spiritual exercises of St. Ignatius Loyola and prayer books available to attendees during this time as well.

Barfield said he will also provide suggestions on how they could use the reflection time to get what they want out of it.

“I feel like I have done this so much that I can listen to a person for a few minutes and get a sense of what their hopes or desires are and then I can point them in directions to fulfill those,” Barfield said.

The event is free and lunch will be provided to attendees.

After lunch, Plaster said there will be a debriefing on attendees’ thoughts during the silence period and how they plan to use it going forward.

“Silence can often seem like an absence of things; silence sometimes feels empty and heavy,” she said, “but I want people to be able to find silence and find the lightness and the freedom in silence.”