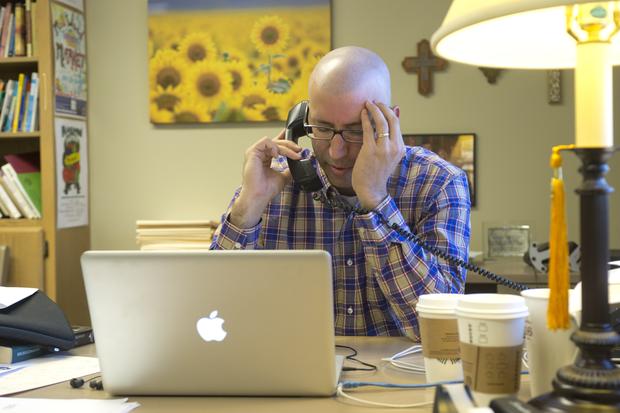 At Millwood Presbyterian Church, the Rev. Craig Goodwin forgets his diagnosis of lymphoma for a moment and prays over the phone with a parishioner experiencing a family crisis on Oct. 22.

Reprinted with permission from The Spokesman-Review

It started with a pain in his shoulder that started radiating down his arm. The doctor, thinking that the Rev. Craig Goodwin had strained a muscle, ordered physical therapy. It didn’t help.

After a month, the truth was revealed. A CT scan showed a mass in his shoulder. Doctors said it was probably cancerous and Goodwin waited a week to get the results of his biopsy. “That was a really long week,” Goodwin said.

Tests showed it was high-grade type b non-Hodgkin’s lymphoma.

He got the results of his test at 2:15 p.m. on Oct. 3. By 5 p.m. he was receiving his first chemotherapy treatment. Goodwin’s doctor put him on an aggressive schedule: He has to spend five days in the hospital every three weeks to receive continuous chemotherapy.

“It’s sort of a newer regime for lymphoma,” he said.

But the news was not all bad. Though the cancer had begun migrating toward his spine, tests showed no cancer cells in his spinal fluid or bone marrow. One of his doctors said that it was good that the cancer had been caught when it had because it could have led to paralysis, Goodwin said. “He just said that in passing,” he said. “It was sobering.”

Goodwin, 44, has had a lot to process. As pastor of Millwood Presbyterian Church he is usually the one counseling people with a difficult health diagnoses.

“That’s been an adjustment, being on the other side,” he said. “I have a new perspective.”

For some people such a diagnosis can lead to a crisis of faith. There’s no such crisis for Goodwin.

“As a pastor I’ve been around death and sickness so much,” he said. “I feel like, who am I to be exempt from this part of life? I feel like my faith is strong. If anything it’s deepening my sense of how important that is. Things get put in perspective really quick at times like this.”

He is sporting a new look to go with his diagnosis. He recently shaved his head and trademark goatee after his hair started falling out in chunks. “My eyebrows aren’t coming out quite yet,” he said, reaching up to check.

Goodwin has been sharing information about his illness on Facebook and recently moved those posts to his Year of Plenty blog (www.yearofplenty.org) where he usually talks about food, faith, the environment and the connections among the three. “It’s just a way of coming to grips with this reality,” he said.

His chemotherapy is scheduled to continue for at least five more treatments, followed by radiation. “They hope by the fourth chemo it will go into remission,” he said. “After four if it’s not in remission they’ll do four more.”

Goodwin’s family, including his 13- and 11-year-old daughters, faced initial panic after the diagnosis. But Goodwin said his treatment is going well; the mass in his shoulder has shrunk after only one chemotherapy treatment. Goodwin reported to the hospital for another round Monday. “Things have settled down,” he said. “We feel like we have a plan.”

It helps that their church, friends, family and community have rallied around his children to provide support. “I think we’re all sort of relying on that at this time,” he said. “I think they’re handling it with a lot of courage.”