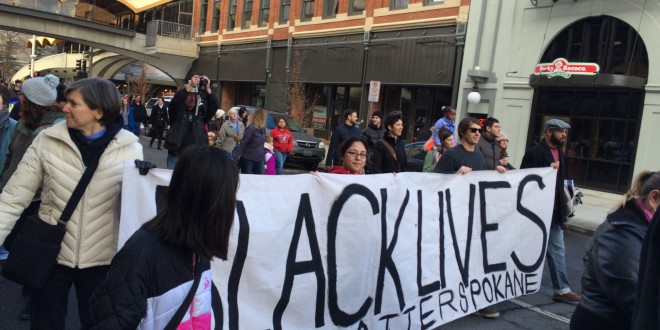 The more I watch, the more I see that the majority (if not all) of the rallies, protests, marches in Spokane are missing anyone under the age of 30-40. The more I’ve been noticing this, the less I’ve been questioning it. The majority of people my age (20’s) are doing things “behind the scenes” or just aren’t participating. Not because we don’t care as much, or because we don’t want to be involved, but because when we show up we are told to be silent, to listen to our elders, to not be angry.

I’ve watched my kids, their friends, and my friends show up less and less because we’re exhausted from putting in all of this work only to be told that it’s not enough, it’s not good enough, that our voice doesn’t matter, that our anger is unjustified, and that we just need to be quiet and let whatever the issue is just play out.

The problem with this is, the moment we stop showing up, stop speaking up, we are labeled as ignorant, lazy, uncaring millennials. The problem is, we care so much that our anger pops up, our motivation is fueled by this anger of watching our world get worse and worse.

By watching schools continually put children in danger if they’re different.
By watching the “president” make executive orders tearing people rights away left and right.
By having our parents and leaders claim biblical truths as laws, saying that we’re in the wrong because “the bible should control our actions and government.”

The problem is, we are angry. We are mad. We are furious.

But we are being told to sit down and shut up because the “adults” are talking.

We are being told that we have no right to be angry, even though our rights, our friends’ rights are being challenged in nearly every state. Our friends, classmates, families are afraid to walk down the street because they may appear too queer,
too foreign,
too different,
too Muslim,
too Jewish,
too un-white
to belong in America.

They tell us if we don’t like what we’re seeing, to fix it.
But we can’t when every door is being slammed in our face
when every elder is telling us that our anger is “ungodly”
when they throw bible verses in our faces,
but they seem to forget that Jesus flipped tables,
helped the poor,
the needy,
the different.

They seem to forget that even the Bible justifies our anger over people being treated as less than human.