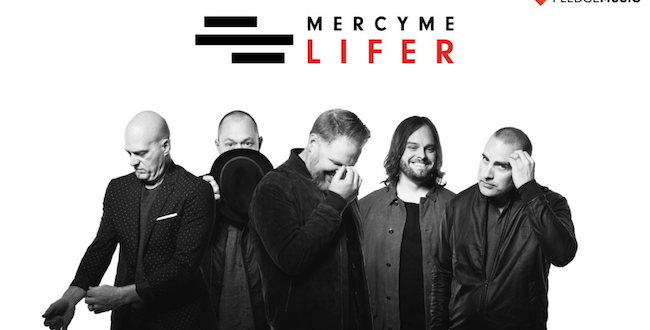 MercyMe’s new album, “Lifer” offers something for everyone

I remember listening to MercyMe’s “I Can Only Imagine” from the middle seat of a minivan. Once I got my own radio for Christmas I turned the dial from “Spirit 105.3” to the classic and alternative rock stations. Beginning in high school and throughout college, I avoided contemporary Christian music. I started attending churches that featured hymnals instead of amplifiers. All of this to say that I’m not sure what was going through my head when I volunteered to write a review of MercyMe’s newest album. I’m not up to date with the Christian music scene. I actively avoided it for several of my angry-teenage years. My favorite worship song was written 260 years ago!

MercyMe’s ninth studio album, “Lifer,” released in March 2017, is a dramatic departure from the even tempo and slight Texas twang of “Word of God Speak” and “Bring the Rain” that I heard in church lobbies in the early 2000s. I popped the CD into my car’s stereo and trumpets blasted at me, followed by the fun and funky beat of the title track. I didn’t recognize this band at all, unless the disc was swapped with TobyMac. The next two tracks are energetic, catchy (a kind word for repetitive) pop songs that had me tapping my foot even as I rolled my eyes at some of the lyrics.

“Best News Ever” and “Even If” slow the pace down and return to the guitars and “churchiness” of the bands’ earlier songs. The lyrics in both are honest to the realities of life, addressing the weakness of humans and rejoicing in the strength of God who carries our burdens for us. We don’t always feel like singing praises; we don’t always feel like there’s anything to rejoice over. The lyrics in “Even If” acknowledge this truth: “It’s easy to sing/When there’s nothing to bring me down,” but when times are bad: “I’ve stood on this stage night after night/Reminding the broken it’ll be alright/But right now, oh right now I just can’t.” Good times and bad, God meets us where we are even when “A little faith is all I have, right now.”

My favorite song on the album is “Hello Beautiful,” hands down. The lyrics play prominently, the rhythm is catchy and the message is something that we all need to remind ourselves of. Christ broke our chains long ago, it’s up to us to get up and walk out of our prison cell. It’s time to say:

In a video about the album, lead singer Bart Miller explains that “…reminding people of victory and who they are in Christ was the overall theme of this record.” The joyful hip-hop and funky beats throughout “Lifer” that compel you to dance, especially in “Happy Dance” and “We Win,” are part of the victorious message the band is sharing. “Christ is in you now, you’re supposed to enjoy every step along the way,” Miller continues.

Although I won’t be listening to the whole album again, I was pleased to find a couple songs I enjoyed. “Hello Beautiful” will certainly find its way onto one of my playlists. The eight songs are surprisingly different from each other – this wasn’t an album that sounds the same all the way through – so there’s something for everyone, even if your tastes, like mine, generally lead you away from Christian radio.

Previous Ask a Jew: Why are Jews so offended by pork?
Next What’s your definition of ‘humility’?