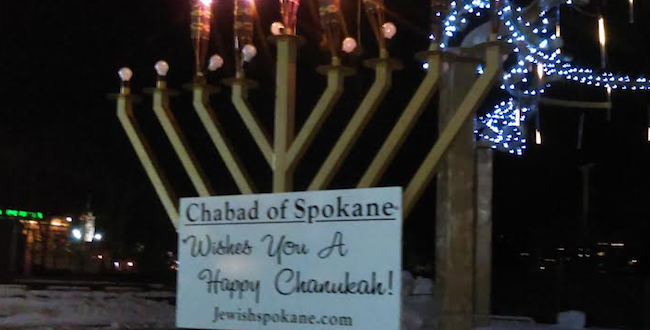 Menorah Lighting downtown a reminder to “Be a candle”

By Justin Felts and Amber Woods

Near freezing temperatures and gusty winds didn’t keep the public Menorah Lighting put on by  Chabad of Spokane County from being a bright, warm event for the community. This marks the fifth year that the group has held a public Menorah lighting.

A live Klezmer band opened the event with lively traditional music before Rabbi Yisroel Hahn took the mic to begin the ceremony.  City Council members Karen Stratton and Mike Fagan also spoke to the crowd reminding those in attendance that the story of Spokane is tied closely with the story of Chanukah, owing to early Jewish settlers in the area.  Before the Menorah was lit however, candles passed out to the crowd were lit from the Shamash.  The lighting was followed by a prayer and more festivities.

Featuring handmade Latkes and doughnuts this year’s celebration was smaller than in past years, numbering less than 100 in attendance.  Hahn attributed this not to the weather as much as to the closure of most of Riverfront Park for construction.

“In the past we’ve had a few hundred,” he said. “And we could always count on traffic through the park.  Now with most of the park closed you can see there’s almost no traffic.”

Small numbers didn’t hamper the festivities, however, which included a fire dancing performance and “Chanukah Gelt” for the kids, this year in the form of $2 bills.

Despite recent political tension between the U.S. and Israel, or perhaps due to it, the tone of the event this year was one of finding the meaning of Chanukah in the world around us and applying its message to shine as beacons in the darkness of an ever darkening world.

As Hahn said during the lighting, “We are not disturbed by the darkness around us… if you want to influence someone in the world, be a candle, your warmth and kindness can dispel tremendous darkness.”

Previous Reflections on Chrismukkah 2016
Next Trump as Parable