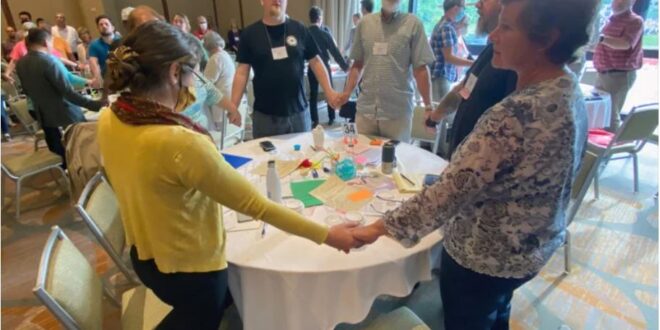 Mennonite Church USA delegates hold hands and sing after “A Resolution for Repentance and Transformation” was approved at the special session of the Delegate Assembly on May 29, 2022, in Kansas City, Missouri. Photo courtesy of MC USA

The governing body of the largest Mennonite denomination in the United States passed a resolution on Sunday (May 29) confessing to “committing violence against LGBTQ people” and committing to LGBTQ inclusion.

In a separate vote, Mennonite Church USA also repealed instructions to pastors not to officiate at marriages between people of the same sex. The denomination’s official confession, which views marriage as between a man and a woman, remains unchanged.

Nearly 83% of the delegates meeting at a special assembly in Kansas City, Missouri, voted in favor of repealing the guidelines barring marriage for same-sex couples, while the resolution for LGBTQ inclusion passed by a narrower margin, with 55.7% in favor.

“Excluding LGBTQIA people from the church is a rejection of God’s joyous delight in the diversity of creation and a denial of the Divine image and breath animating all humankind,” the Resolution for Repentance and Transformation reads.

The resolution commits the denomination to forming an LGBTQ constituency group, creating denominational resources on repentance and reconciliation for local congregations and honoring LGBTQ people in future theological statements.

The Mennonite Church USA traces its roots to 16th century Anabaptists and, like other Anabaptist groups, is known for its beliefs in adult baptism and pacifism. Today, the group has approximately 62,000 members and 530 congregations organized into 16 conferences. Formed in 2002 as a merger between two older denominations, the Mennonite Church USA initially adopted the now-repealed membership guidelines prohibiting pastors from officiating same-sex weddings. This was done as a compromise in a dispute about whether to exclude LGBTQ individuals from congregational membership, according to ordained Mennonite pastor and Ph.D. student Isaac Villegas.

“That compromise decision began this pattern of harm against LGBTQ people, because they became bargaining chips for the unity of the denomination,” said Villegas, a Mennonite pastor who resigned from the church’s executive board in 2016 after he conducted same-sex weddings.

In November 2015, the denomination’s largest and most traditional conference, the Lancaster Mennonite Conference, voted to remove its 179 churches from the Mennonite Church USA over concerns the denomination was weakening its stance on traditional marriage. Individual conferences have supported the ordination of LGBTQ ministers and supported same-sex weddings in recent years.

The Mennonite Church USA’s horizontal structure means that in practice the denomination holds little more than symbolic authority over individual conferences. So while the membership guidelines prevented pastors from performing same-sex weddings in theory, conferences implemented (or ignored) those guidelines however they saw fit.

The denomination’s structure also allows it to hold policies that are apparently contradictory. Officially, the confession of faith affirms marriage as being a covenant between a man and a woman, though the new resolution implicitly expands that definition.

“Mennonites have a tendency to stack confessions,” said Glen Guyton, the denomination’s executive director. “So we don’t necessarily get rid of one or revise them. We create new ones that reflect who we are at a certain period of time.”

Guyton added that some of the actions included in the latest resolution had already been addressed by the denomination’s executive board in 2020, and he said that like other policies adopted at the national level, it won’t be enforceable at the congregational or conference level.

“This action, and I say this carefully, is more symbolic in some ways than it is indicative of actual changes that are going to happen at the congregational or conference level,” said Guyton. “But it is a big symbol, I think, for many.”

At the weekend assembly, a number of delegates expressed concern that the resolution would stoke division, rather than healing. “We need both the traditional and the progressive. We cannot do this work if we don’t have both,” said Dwight McFadden of Millersburg Mennonite Church in Ohio, according to Anabaptist World. “I don’t feel like this is the third way that we are known for.”

But according to Villegas, while the implications of the resolution will still need to be worked out on the local level, the message it sends is loud and clear. “As a national denomination, we now say that we are a pro-LGBTQ denomination. That is our position.”

This story has been updated to reflect that Isaac Villegas is a Ph.D. student. A previous version said Ph.D. candidate.